The HoopsHype Daily: The Jazz are looking more like a fringe playoff team than a dark horse contender lately

The HoopsHype Daily: The Jazz are looking more like a fringe playoff team than a dark horse contender lately

PANIC TIME IN UTAH? The Utah Jazz, once thought of as a dark horse title contender, are 1-4 in their last five games (all on the road) and have the NBA’s seventh-worst net rating in that stretch, behind “powerhouses” like Chicago, Golden State and Memphis. Things have gotten so bad recently that Utah trailed the Raptors by 40 (FORTY!) points at halftime of their game on Sunday. Even if we look at their season as a whole, however, and forget about their recent road trip, Utah has disappointed overall this season. For the year, they’re 12-9 and have a mediocre +1.2 net rating, the No. 13 mark in the league.

Particularly concerning has to be the play of their big acquisition from this past summer, Mike Conley. The former Grizzlies point guard is averaging 13.9 points per game, down from 21.1 last year, and shooting a paltry 36.9 percent from the floor, the third-worst mark in the league among players with at least 200 field-goal attempts.

🏦  Considering Conley is the 17th-highest paid player in the league, that level of production is unacceptable if the Jazz are going to make their usual second-half run this season. It’s unlikely Utah decides to do anything drastic (i.e., a major trade), at least not anytime soon, but if they continue down this path, they might need to do something to shake things up and find their previous years’ form.

LAST NIGHT IN THE ASSOCIATION: A 10-game losing streak ended last night while an 11-game win streak was extended.

😌 The Atlanta Hawks, losers of their 10 previous outings, finally got off the schneid last night, beating the lowly Warriors 104-79. Trae Young led the way for Atlanta with 24 points and seven assists.

🦌 Meanwhile, the Milwaukee Bucks won their 12th game in a row, downing the Knicks 132-88. Yes, you read that scoreline correctly. The highlight of the night belonged to Giannis, who threw down this absurd dunk on Julius Randle. Antetokounmpo finished the contest with 29 points, 15 rebounds and three assists, so, all around, a pretty quiet game for him by his usual standards.

MAX FVV? ESPN’s Bobby Marks says a team told him they could see impending free agent Fred VanVleet landing a deal worth between $25 million and $30 million this summer. By the way, he meant that figure as an annual amount, not as the total worth of the deal, which is insane. VanVleet is an underrated floor general enjoying his best career campaign, averaging 18.6 points and 7.5 assists per game, but still… that’s a pretty rich deal for a player of his caliber.

📝 At the same time, it’s a very weak free agent class coming up, so players like VanVleet are going to get overpaid, there’s no doubt about it. On our end, we have the Raptors point guard ranked as the 14th-best free agent of 2020.

PLAYERS OF THE WEEK: Giannis Antetokounmpo won Player of the Week for the East yesterday. Unsurprising. The winner out of the West, though, was a good bit more shocking, since the honor went to Carmelo Anthony, who averaged 22.3 points, 7.7 rebounds and 1.7 triples last week. Pretty great comeback story so far for the future Hall-of-Famer.

THE WIGGINS RESURGENCE: Andrew Wiggins is having the best season of his career, and he credits Ryan Saunders, his head coach, for believing in him, as well as wanting to prove the naysayers on TV and social media wrong.

GEM UNLOCKED: The Miami Herald goes in depth on how the Heat were able to discover Kendrick Nunn, their current second-leading scorer, last year while he was coming off the bench for the Warriors’ G League team.

FRESH POD: Our very own Alex Kennedy is joined by NBC’s Tommy Beer to discuss the NBA’s ratings being down, the midseason-tourney idea, the Knicks’ struggles and Carmelo Anthony’s return.

PHILANTHROPIC CONTRIBUTIONS: Grizzlies head coach Taylor Jenkins has started a program called Assists for Education, where for every assist his team makes this season, he’s donating $10 to help provide school supplies and clothing to area students.

RECORD-SETTER: Curious about what records LeBron James is set to break this season? Read all about it here.

AIR GIANNIS: Nike has huge plans for Bucks forward Giannis Antetokounmpo, and with good reason, too, as the Greek Freak is a major international superstar.

AWKWARD SNEAKERS: Thunder point guard Dennis Schroeder got bullied by multiple teammates, including former MVP Russell Westbrook, into changing the sneakers he wore for games. The sneakers in questions? Well, they were Kevin Durant XI’s, so… yeah. Makes sense. 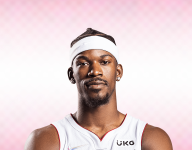