DON’T SLEEP: For those that hadn’t noticed, and there may be a few people who fall under that category, considering they play in one of the league’s smallest markets, the Grizzlies have now won six games in a row, a streak that started with a 26 point-win over one contender, the Clippers, and that continued last night with a 121-110 victory over another contender in Houston. This hot run of form has head coach Taylor Jenkins’ team at 19-22 overall and sitting eighth in the West, doing so in a season where many expected them to compete for a high lottery pick, not the playoffs.

Over the past week and change, Memphis ranks third league-wide in net rating with an impressive +13.3 mark, a clip that outpaces the likes of Milwaukee, Denver and Boston. And they’re doing it by playing an extremely appealing style of basketball, one that features them ranking fourth in the NBA in pace and sixth in transition efficiency, per Synergy Sports.

The most impressive part of Memphis’ run has been the play of rookie lead guard Ja Morant, who isn’t just the heavy favorite for Rookie of the Year right now, but has the makings of a future superstar ball-handler. Not only is he a maestro handling the rock and finding teammates for easy buckets, he also possesses an otherworldly level of bounce, which allows him to throw down dunks that don’t make sense physically.

The stud point guard isn’t lacking in confidence, either. Make it a point to watch the Grizzlies play sometime; at the very least, you’ll be very entertained.

LAST NIGHT IN THE ASSOCIATION: MVP frontrunner Giannis Antetokounmpo needed just 21 minutes and 17 shot attempts to drop 37 points on the Knicks, in what was a 128-102 for Milwaukee. Elsewhere, Trae Young had 36 points and 10 assists to lead the way for the Hawks in a 123-110 win over the Suns, while Kawhi Leonard exploded for 43 points in a lopsided Clippers win over Cleveland.

🏀 The Warriors are planning to re-sign Marquese Chriss to a two-way contract, one week after releasing the blossoming big man.

🏀 The Magic signed former Rockets forward Gary Clark to a 10-day contract. Clark shot 35.3 percent from three over 18 games in Houston this year.

🏀 Miami signed G League forward Kyle Alexander to a two-way contract. The team reportedly has no plans to bring him up to the main roster anytime soon.

🏀 Phoenix is planning to make a two-way addition of their own; they’re reportedly preparing to sign G Leaguer Tariq Owens.

BIG PLANS ON SOUTH BEACH: The Heat made a huge statement landing Jimmy Butler last summer despite having negative cap space. And they’re not done yet, says Brian Windhorst, who writes Pat Riley has a chance to create one more super team in Miami.

SPEAKING OF MIAMI: We spoke to Heat sharpshooter Duncan Robinson, who talked to us about how he prepared for the breakout season he’s currently enjoying. Robinson ranks sixth in three-point accuracy (43.4 percent) among players with over 150 attempts from deep this year.

FRESH POD: Our own Alex Kennedy is joined by fellow HoopsHype scribe Bryan Kalbrosky to discuss the five players who are appearing most in trade rumors recently.

TY LUE SPEAKS: Former Cavs head coach and current Clippers assistant Tyronn Lue granted the first interview since being let go by Cleveland. In it, he says he wishes he still coached the Cavaliers, and that he doesn’t think he should have been fired. Considering how poorly the John Beilein era has started off, Lue might be right.

AN EXPENSIVE FRIEND: This past summer, the Nets signed DeAndre Jordan to a lucrative contract, one worth $40 million over four years. They did so partly for his basketball abilities, and partly for his soothing locker-room presence. Of course, Jordan being close with Kevin Durant and Kyrie Irving probably didn’t hurt, either.

THE X-FACTOR: Steve Clifford thinks 24-year-old forward Aaron Gordon is the Magic’s most important player, and that Orlando will only reach their full potential if the talented swingman reaches his first.

A NEEDED BOOST: Nets guard Caris LeVert is giving the Nets a much-needed boost since returning from injury, and they’re going to need it, because their schedule is about to get brutal.

BRUTAL HONESTY: Austin Rivers is confused as to why the Rockets haven’t been better to this point in the season. For what it’s worth, James Harden, who points out the team hasn’t been very healthy yet this year, isn’t worried.

OLYMPIC PREP: The Serbian Basketball Federation announced the hire of Nuggets head coach Mike Malone as a top aide and consultant to Igor Kokoskov. Pretty decent pick up there for Serbia ahead of the crucial Olympic qualifying tournament this summer. 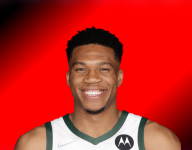