BOSTON — Four-time NBA champion Shaquille O’Neal is a man of many nicknames and monikers. One that is getting more attention of late is DJ Diesel.

The 47-year-old, 15-time NBA All-Star has long been interested in his persona outside of sports. Whether as an actor or businessman, it is never a surprise to hear his name pop up when discussing a new project. Plus, it is no shocker to see him succeed in music – his debut album went platinum in 1993.

Now, he is earning the love of fans at festivals including Lollapalooza in Chicago and Tomorrowland in Belgium. Most recently, O’Neal performed in front of a soldout crowd of 1,400 people at Big Night Live in Boston. Those in attendance were folks of all ages, including quite a few wearing retro Los Angeles Lakers jerseys despite being a New England audience. 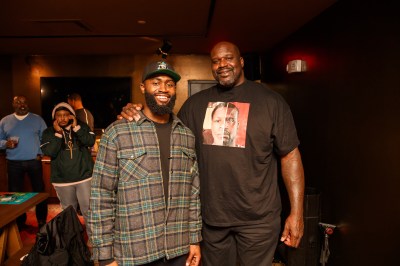 One person who watched the event was Boston Celtics star Jaylen Brown, who felt inspired by the performance and is now considering spinning his own sets as a hobby.

O’Neal’s set included a wide range of music, hitting everything from “Hey Ya!” by OutKast to “Love Shack” by The B-52’s (a clever way to get people to shout his name) during the evening.

Beforehand, HoopsHype had the chance to catch up with O’Neal for an exclusive one-on-one conversation about why he does what he does and his background as a performer.

You’ve performed in Boston quite a bit recently. You’re playing Big Night Live tonight. You’ve also played The Grand Boston and The Mémoire at the new Encore casino. What have been some of your memories of those shows and what keeps bringing you back?

Shaquille O’Neal: Boston has always been very hospitable to me, especially ever since I became The Big Shamrock. But even before that. This town just likes to work hard, play hard and have fun. I’ve been doing that, too, since the House of Pain days. Whenever I get a chance to come back here, I want to let them know that I miss them and try to put on a good show.

How different is this DJ set going to be from when you conducted the Boston Pops Orchestra back in 2010?

Shaq: Oh, it’s going to be a lot different. These kids, after a hard week, just want to release. It’s sort of like a basketball game. People always ask me: why do you do this? I don’t get paid anything. This, right here, is my game tonight. Boston was playing New Orleans and put up 140 points. I’m about to go out there and score 140. My thing is: these kids spend their hard-earned money, right? You’ve got to give them a show.

You’ve said that these shows sort of feels like Game 7. Describe the similarities in terms of the atmosphere and how you play off that?

Shaq: That’s right. You come out. The crowd is going wild. They’re waiting for you hit your shot. You give them a shot of a banger and you get them to go up and down. And you just keep going. You break them down then call a timeout. Let them get their breath. And then you break them back up. There are four full quarters of DJ’ing.

What are some of the things that we are going to see when you take the stage?

Shaq: I don’t care if I get hurt if I go into the crowd. When your favorite song comes on, it does not matter who you are or what you are. You look around at the person next to you and everybody is doing the same thing. Everybody is just jamming. I’ve never had a problem. I’ve been doing this 30 years. I never know what I’m going to do until I go out there. I have to look at the crowd before I know what to play. I’ve got one hundred songs I can choose from.

So if they’re chanting “That’s How I Beat Shaq” by Aaron Carter, would you let them have that?

Shaq: No, I don’t want anything custom. Sometimes, they raise the stage. But I have to tell them not to do that. Because then people won’t be able to see and I want people to see this. If I have to bend down, then I’ll bend down. I don’t want anything special. Whenever you step into someone else’s genre, you have to gain people’s respect. I can go get some gold but I don’t want that I just want whatever anyone else is doing.

One thing I love is that you say you respect the genre of bass music. I’m curious: what would have happened if you had pursued this full time? I know you came into this when you were, what, 16 years old and you bought the mixer.

Well, you’re always going to be Shaq with your persona and your charisma. But yes, without being a basketball player.

Shaq: Based on my mentality, I would be considered one of the top DJs. I’m doing this for me, I’m not doing this for a living. But I know I used to be that kid that used to want to jam to Public Enemy and LL Cool J and Big Daddy Kane. So it’s about them. I respect the fact that they came to see me. I want to always give my fans a night to remember. It really is similar to a Game 7. It’s a championship game and Shaq is going to win tonight. It’s over. I respect it and I like that challenge.

When you were at LSU, were you DJ’ing parties and events and the like?

What was that like as a basketball player? Because you were obviously pretty hyped up as a prospect when you were in college.

Drake has the lyric “I swear sports and music are so synonymous / Cause we want to be them, and they want to be us.” Does that resonate with you?

Shaq: It’s true. We never talked about it in the locker rooms. But I know for a fact. Home or away, I used to have a gold rope chain and a Kangol hat and I was in the locker room, listening to “Real Bad Boyz” by Big Daddy Kane. And when I took that off and put it in my bad and changed into my shoes and gear, I was Dr. J. From the age of 9-10, I practiced both at the same time. I was dribbling and then I got home and I would write rhymes and make beats in my head. When I got my first turntables, I taught myself how to scratch. I taught myself how to blend and bring tempos together. I’ve been doing this for a long time.

So you’re far from surprised when you see guys like Damian Lillard and Marvin Bagley III spitting their own tracks?

Shaq: I know it’s in their blood and I know why they do it. We all grew up the same way.

How appreciative are you, as an entrepreneur and performer, that you have become such a multi-dimensional person? You’re on TV every day, you’ve been involved with so much.

Shaq: I’m very grateful. The cool thing for me is I’ve been doing it all my life. So when I was playing basketball, I was rapping. When I was rapping, I was DJ’ing. When I was DJ’ing, I was sitting up there like I was a movie star. When I was doing this, I was doing that. I was writing commercials. I was trying to make people laugh. I’m 47. It’s been 45 years like this. I’ve always been an entertainer. I’ve always been a class clown. I’m doing what I’ve just always done. I didn’t come into the league and say I wanted to be a rapper. I get an offer for a five-album deal. I said I don’t think the world will like me rapping. However, if you allow me to rap with all my favorite rappers, I’ll do it. Then I met these guys and I said I wanted to DJ. It’s all stuff that I been doing. That’s why I think it comes so naturally to me.

What do your kids, who are teenagers, think about the dubstep that you are spinning?

Shaq: They love it. They always come to my shows. They love it. To them, I’m more “cool dad” and I let their moms do the discipline. I’m just: “hey, let’s go take a ride” and show them things. Let them have fun. Respect people and your elders. Be nice. Be courteous. Do what you are supposed to do. But like when they hang out with me, it’s more just hanging out and they’re backstage and know how big of a privilege it is.

When I interviewed Bol Bol, I asked him about his favorite up-and-coming prospects and he said: Josh Christopher and Shaqir O’Neal. How is everything going with his high school experience so far?

Shaqir O’Neal with the dunk over Josh Christopher. Shaqir keeps getting bouncier and bouncier @Jaygup23 pic.twitter.com/5MvQzUxejT

Shaq: He is out in Georgia with me, playing at a little school out there. I’m getting ready to unleash all my tricks on him. But it’s fun being a dad. I think what they understand and respect about me is they know I walk the talk. So I can show them my moves as a big man. But I can also say Kobe Bryant did it like this. And their eyes open up. I’ll say Tracy McGrady did it like that and they will pay attention. I’m one of the greats but I also played with the greats so when I’m teaching it, they are open to it.

Being such a public figure, what are some of the things you’ve taught your kids?

Shaq: Simple rules: love others, be kind, be courteous and follow your dreams. I tell them all of the time that the world does not need another me. Be yourself. People are going to try to pressure you. I tell them to be the best you can be. I know kids are very influenced by social media. That is both a good thing and a bad thing. I have to tell them all the time that they don’t have to be like me.

Shaquille O'Neal in video games through the years