The world is in shock right now after the death of Kobe Bryant, who passed away along with his daughter, Gianna, and seven other passengers in a helicopter crash. As we all mourn and process this devastating news, many people are sharing their favorite Kobe stories. Having grown up idolizing Bryant, I’ll always cherish the handful of interactions I had with him.

When I was 17 years old, I had the opportunity to interview Bryant in Orlando during an After-School All-Stars charity event (after emailing his publicist more times than I’m proud to admit). He accepted a key to the city of Orlando and spoke with hundreds of children about the importance of academic success and chasing their dreams. I’d only ever seen Bryant on television, so the thought of meeting him and talking to him one-on-one was incredibly nerve-wracking.

However, when Bryant arrived, he was extraordinarily friendly and gracious. He gave thoughtful answers and was so kind, even though I was just a teenager and there were a million more important things he could’ve done with his time. Whoever said “never meet your heroes” clearly wasn’t talking about Kobe. It was sweet watching this on-court assassin interact with young children too. They went nuts when he emerged from the Amway Arena tunnel and after joking with them for a bit, he spoke about the importance of education and chasing your dreams. The kids were captivated, hanging on his every word. After the event, he told me that he felt blessed to be in a position where he could have such a significant impact on the youth.

It’s not an exaggeration to say that Kobe is the reason that I fell in love with basketball (as is the case with many in my generation). We bought his shoes, wore his jersey and had posters of him covering our walls. Kobe was the player that we pretended to be, whether we were playing pick-up with friends or hurling objects across the room into a trash can. As a sportswriter, you’re supposed to be objective and play it cool around athletes. Typically, that’s not hard; after all, players are just people too. But Bryant always seemed like a larger-than-life figure to me.

Kobe randomly followed me on Twitter in April of 2018. It was one of those moments that would’ve had 12-year-old me losing my mind. After DMing back and forth, Kobe agreed to join me as a guest on The HoopsHype Podcast. For 30 minutes, we talked about his playing days, life after basketball, off-court endeavors and much more. Once again, he was so friendly. He offered tremendous insight and told hilarious stories. It gave me the opportunity to thank Bryant for being so nice to me when I was a starstruck teenager, and I’m so grateful that I got to talk to my childhood hero one last time.

Kobe inspired countless people to pick up a basketball, including many of the NBA’s current players. Even if you aren’t a Kobe fan, it’s very possible that Bryant is your favorite player’s favorite player.

During Kobe’s playing days, I loved to ask rookies about their first match-up against Bryant. They often talked about how intimidating he was, and how he was just as unstoppable as they’d imagined. For many players, sharing the court with Kobe was their welcome-to-the-NBA moment and something they’ll never forget. Many players would talk about how he could beat you in so many different ways. “His counter-moves have counter-moves,” Courtney Lee once told me. That’s because he spent countless hours in the gym, perfecting his craft. Kobe’s insane work ethic, tenacity and desire to be great are a huge part of his legacy.

There are many stories about Kobe’s work ethic and how he was always looking for ways to improve. In order to gain an edge on the court, he did things like study Bruce Lee’s style of martial arts (Jeet Kune Do), take tap-dancing lessons, learn how sharks hunt their prey and adjust his leadership style based on how composer John Williams conducted his orchestra. His unconventional methods clearly worked, as he won five championships, scored the fourth-most points in NBA history and solidified himself as one of the sport’s all-time greats. Bryant’s relentless approach also led to incredible success away from basketball, launching Granity Studios and winning an Oscar in 2018 for his animated short film “Dear Basketball.”

Kobe may have the largest, most passionate fan-base of any player in NBA history. There’s no question that he had a profound impact on millions of people – as evidenced by the mass devastation when this gut-wrenching news broke. After a tragedy of this magnitude, it’s hard to find any silver linings. With that said, I’m glad that Kobe was showered with love and adoration during his retirement tour in 2016. Sometimes, we don’t celebrate our legends until they’re gone; fortunately, that wasn’t the case with Kobe. That didn’t make yesterday – or today, for that matter – any easier, but at least Kobe knew just how beloved he was and how many people he impacted. Most of all, his daughters, who were the center of his universe.

Still, this doesn’t feel real. I can’t believe that I’m writing these words and talking about Kobe in the past tense. Our thoughts and prayers are with his wife, Vanessa, and his daughters, Natalia, Bianka and Capri. I can’t imagine what they’re going through right now, mourning the sudden loss of two family members. Kobe’s passing was hard enough to stomach, but learning that two 13-year-olds (Gianna and one of her teammates) were on board makes this story all the more heartbreaking.

Rest in Peace to one of the NBA’s all-time greats and a terrific father, Kobe Bryant.

Rest in Peace to an incredible young woman who was taken from us too soon, Gianna Maria-Onore Bryant.

Rest in Peace to the seven others who perished (including John Altobelli, Keri Altobelli and Alyssa Altobelli), whose lives are just as important and whose families are just as devastated today.

Let this be a reminder to cherish our loved ones and never take life for granted. 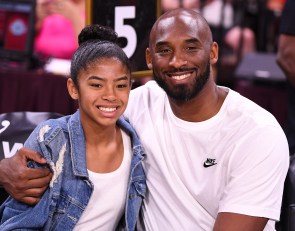