SOLEMN THOUGHTS: For the first time since the tragic accident that took Kobe Bryant’s life, along with those of eight other people, it was a Tuesday night, meaning it was time for the NBA on TNT, one of the most important basketball shows in the history of the sport. And, as only they could, they paid their respects to the fallen star with beautiful words and thoughtful anecdotes.

Shaq was in tears, saying that he felt like he lost a little brother and how he regrets not talking to Kobe more when he had the chance. Dwyane Wade, also emotional, talked about wanting only one player’s respect during his days in the NBA – respect from Kobe. Jerry West, who joined the usual TNT crew, said it was the saddest day of his life, with the only moment that could come close was when he lost a brother in the Korean War.

Hearing those legends discuss their old friend was therapeutic and helped us with the healing process as much as it helped them.

HONORING KOBE: Various players are taking it upon themselves to unofficially retire Kobe’s No. 8 and No. 24 jerseys by changing their numbers. Among those switching jersey numbers: Spencer Dinwiddie, Terrence Ross and Maurice Harkless.

Portland is open to hearing offers for Hassan Whiteside, who is posting big numbers yet again this season, although, as is usually the case with him, they aren’t really impacting winning.

Sacramento might reconcile things with backup big man Dewayne Dedmon, which makes sense considering he’s owed $40 million and very few teams, if any, will be willing to take that onto their payroll.

Woj cautions it might be a slow trade deadline, as there aren’t many big-name players being discussed among teams at the moment.

SMALL-MARKET MONSTERS: The Indiana Pacers recently gave our Alex Kennedy a behind-the-scenes look at their organization, giving him access to their executives, players and coaches. President Kevin Pritchard and GM Chad Buchanan discuss how they created their culture, the unique challenges that come with running a small-market team, their much-maligned Paul George trade and more.

MVP RACE: We rank the Top-10 players of the 2019-20 MVP race, where Giannis continues to hold a commanding lead and Ben Simmons makes a first-time appearance.

TWO MAJOR RETURNS: After missing a few weeks of action due to a hand injury, Joel Embiid made his return last night, dropping 24 points while wearing a No. 24 Embiid jersey to honor Kobe.

Today, Victor Oladipo is set to make his season debut for the Pacers when they face the Bulls. The All-Star shooting guard will be on a minute restriction and come off the bench at least until the All-Star break.

JAMS: Ever wonder what some of your favorite NBA players listen to when they’re shooting around and preparing for games? You’re in luck, because The Athletic has you covered.

AGGREGATE MOCK DRAFT: We take a look at what some of the top NBA Draft prognosticators are saying regarding the 2020 class. Anthony Edwards remains the consensus choice for top pick, but everything behind that is a mess.

TURMOIL IN MINNESOTA: The Timberwolves have lost 10 games in a row, including an embarrassing Monday night defeat where they didn’t just blow a 27-point lead to Sacramento (not exactly world-beaters in their own right), they blew a 17-point lead with under three minutes remaining. Obviously, tensions are quite high at the moment in Minnesota, including with their most-important player, Karl-Anthony Towns.

TOUGH TO SCORE ON: Ben Simmons and Matisse Thybulle have formed an insane defensive partnership, one that has given Philadelphia the league’s No. 2 defense over their last 10 games.

SEARCH FOR A THIEF: Police are looking for a man who is accused of stealing $500,000 worth of jewelry from Allen Iverson, who was holding said jewelry in one backpack. 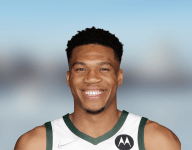