Although the deadline passed more than two weeks ago and all contracts are fully guaranteed for the rest of the season, the Timberwolves can still get under the luxury tax. They are close enough to it ($1,136,269) that they can pull it off through buyouts and/or the waiver/claim process. Not only that, but they can also create significant enough space that allows them to fill out the rest of their roster afterward.

The most straightforward way for the Timberwolves to reduce their payroll right now is through a buyout. Forward Evan Turner is already in the process of meeting other teams with the expectation he will be bought out ahead of the March 1 playoff-eligibility deadline. Guard Allen Crabbe is also a potential buyout candidate.

Turner has received permission with a buyout pending. https://t.co/baHGQ4ykzF

Players usually give back to their previous teams the amount of money their new team will pay them. For the most part, it is the equivalent to their respective prorated minimum salary. For Turner and Crabbe, their daily cap hits are $13,173 and $11,461, respectively. Each day that passes without a buyout is one less day for a new team to pay them, which means less money being surrendered in an eventual buyout to the Timberwolves.

For example, if Turner and Crabbe both get new teams committed to sign them to prorated minimum rest-of-season deals on February 22, they could finalize buyouts with the Timberwolves that day and sign with their new teams on February 24, two days after clearing waivers. Turner and Crabbe’s prorated minimum salaries on February 24 are $684,988 and $595,971, respectively. Combined, that is $1,280,959 that would be surrendered in their buyouts, which would put the Timberwolves $144,690 below the luxury tax.

Although they would be under the luxury tax after those buyouts, they would eventually go over it again in order to meet the 14-player league minimum roster requirement. This particular route would’ve been successful had they done it right after the trade deadline since both players would have given up more money. However, players usually don’t agree to buyouts until they have a new team lined up, so there wasn’t much the Timberwolves could do.

The expectation is that at least Turner will secure a buyout, but for the Timberwolves’ tax avoidance goal, hopefully, there is a bidding war for him. If a team offers more than the prorated minimum salary, such as one that has their mid-level exception (MLE) or a disabled player exception (DPE) remaining, Turner would give back around the same amount to Minnesota. For example, if the Lakers sign Turner using their $1.75 million DPE, the $1.75 million surrendered in his buyout would put the Timberwolves $613,731 below the tax. That is plenty of space for them to fill out the rest of the roster while avoiding the luxury tax altogether.

ROUTE B: WAIVE A PLAYER THAT ANOTHER TEAM WILL CLAIM

Another path for the Timberwolves to get under the tax and avoid it while fulfilling roster requirements is to waive a player whose salary is large enough to create the space but small enough to be claimed by another team. The Miami Heat did this last season when they reluctantly waived Rodney McGruder. They outright waived him, meaning his entire salary would have stayed on their payroll as dead money but because he was claimed by the Los Angeles Clippers, his cap hit was wiped off the Heat’s payroll.

His representation and Wolves discussing his status. Asked someone involved if they could waive him. Answer: “Not determined yet, but possible.” #Twolves #Timberwolves https://t.co/mgf62IM4J9

The Timberwolves have two newly acquired players that so far aren’t in their future plans and could potentially be candidates to be waived: Omari Spellman and Jacob Evans. Both players were acquired alongside D’Angelo Russell so the Warriors can get under the luxury tax, but doing so pushed the Timberwolves over it. Both players are on the second season of their rookie contracts and as of now are only guaranteed for 2020-21, with an upcoming team option for 2021-22.

There is no rush for the Timberwolves to go through this route as it can be done towards the end of the year, just like the Heat did with McGruder last season. Let’s say they decide to waive Spellman ($1,897,800), who earns less than Evans ($1,925,880), and they have assurances of a team willing to put a claim on him. Teams must either have cap space (no one), or a traded player exception (TPE) equal to the amount of Spellman’s salary (Cleveland and Houston, for example) to claim him. If successfully claimed, the Timberwolves would be $761,531 below the luxury tax.

The Timberwolves could look to do a combination of the two routes in order to maximize space below the tax and create additional roster spots. Two-way players Kelan Martin and Jordan McLaughlin have been in the Timberwolves rotation but are limited by their 45-day two-way clock. They could use their post-buyout/waiver space below the luxury tax to sign both players to rest-of-season deals. They could also lock them in for at least three seasons with the remainder of their MLE ($3.7 million remaining as of February 22). 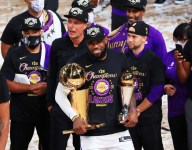