With a history as deep and illustrious as Michael Jordan’s in the playoffs, it becomes easy sometimes to forget some of his smaller accomplishments, like how he did against teams prior to facing them in the Finals. As such, we decided to go back in time and examine how Jordan fared against every single franchise he ever faced in the postseason, of which there are 18 in total. Spoiler alert: He had a winning record against 15 of those teams and a losing record against just two.

That Jordan guy was pretty special in the playoffs.

Jordan and the Bulls faced the then-Washington Bullets in the 1997 playoffs, winning the series in three games by a combined 18 points, with His Airness leading the way. That included a 55-point performance by Jordan which came on nearly 63 percent shooting that evening:

Quick, painless dominance for M.J. over the Bullets.

The following year, Chicago saw the then-New Jersey Nets in the first round, likewise dispatching their overmatched opponents in three games by a combined 23 points. Jordan didn’t have an explosion that series like the 55-point performance against Washington, but he was consistently excellent against the Nets anyway, dropping 39 points in Game 1, 32 points in Game 2 and 38 in the decisive Game 3, which was a 15-point road win for Chicago.

Jordan’s Bulls faced off with the Miami Heat in three separate playoff series, first in 1992 (a three-game sweep which Chicago won by an average margin of victory of 18), then in 1996 (another first-round sweep where the Bulls won by a total of 69 points) and finally in the 1997 Eastern Conference Finals, where Miami was finally able to secure a victory against Jordan, though still succumbing in five games.

His best performance came in Game 3 of the 1992 series when the legendary 2-guard dropped 56 points on 20-of-30 shooting:

The Heat were so blown away by Jordan’s performances against them that Pat Riley went so far as to retire his jersey in Miami, despite Jordan never suiting up for Miami. No, seriously. 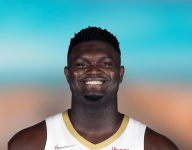