At 34 years old, Miami Heat point guard Goran Dragic is setting a historic pace with his scoring average this postseason.

The Slovenian ball-handler is pouring in 22.2 points per contest over 11 playoff games this year for Miami, which is the best playoff scoring average for a point guard who’s at least 34 years old since 1972-73.

The only floor general with a higher postseason scoring average at 34 than Dragic?

That would be Jerry West, a Hall-of-Famer and one of the greatest players the NBA has ever seen.

So yeah… solid company for Dragic there.

If we forget about positions and look at just age, Dragic’s 22.2 points per playoff game is the second-highest postseason scoring average for a player at least 34 years old since 2001-02, trailing just LeBron James this season, who’s putting up 26.6 points himself.

Again, Dragic in rarified air there, trailing just a player who many consider could be the greatest of all time.

What Dragic has been able to do for Miami this postseason has been nothing short of astonishing. For The Dragon to be the leading scorer on a Heat team that has come from out of nowhere to start the playoffs with a 10-1 record and be within two wins of reaching the Finals is absolutely nuts, especially for him to be doing it as a 34-year-old, one who has never even averaged 22.2 points in a playoff run or in a regular season before.

There’s just something about Dragic playing games this late in the summer that helps him take his game to another level. Lest we forget about how the southpaw led Slovenia to a gold medal in the 2017 EuroBasket Tournament, an accomplishment that took place right around this time merely three years ago:

We’ll see how much farther Dragic is able to lead the Heat this postseason, but no matter what, it’s been an incredible run of form for the Slovenian bucket-getter, and a historic one at that. 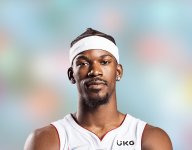