If one thing is for certain about the 2021 NBA Draft class, it’s that they’re not lacking in confidence.

Whether that translates on the court remains to be seen, but on draft night, the prospects selected by teams across the league, from Cade Cunningham and Jalen Green through Alperen Segun and Isaiah Jackson, expressed their elite-level confidence by rocking some of the nicest suits we’ve seen in a while.

Below, check out 2021 NBA Draft suits that were worn by the players selected who attended the event. 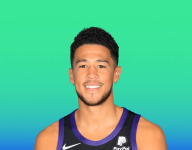