Some prospects are identified with limitless potential but never amount to anything. Other guys come out of nowhere and shock the world.

It’s hard to predict which prospects fall under which category but Chris Brickley has a pretty good idea of how to do it. Brickley is the owner of BlackOps Basketball, where he works as a skills trainer for the league’s top stars.

You may recognize him considering his gym often has pickup games featuring everyone from Carmelo Anthony to Trae Young. He also helps train several famous musicians including the likes of J. Cole and Travis Scott. Brickley, who has over a million followers on Instagram, also owns the clothing brand Color Blind NYC.

He has seen so much of the progress many of the game’s best players have made during their careers. This year, he trained seven of the players selected in the first round of the 2021 NBA draft and some of them will go on to make a big impact in the pros.

With that in mind, Brickley caught up with HoopsHype to teach us about some of the traits and characteristics he has noticed from the players who start off as great prospects but evolve into guys who also have excellent professional careers.

What are some first impressions of guys who have the most success?

Chris Brickley: I look for simple things. Is he going to be on time? When I ask him how his season went, does he say it was good or does he blame the coaching staff? I look for guys that want to work. I like guys who come in at 10 a.m. and we work out and they hit me two hours later asking if I’m free at 6 p.m. because they want a double session. I look for guys who ask me if I want to watch 30 minutes of film before we workout. All the greats do it. Once I’ve started working with guys, I will suggest that. But in the very beginning, I’ll leave it up to them. You can tell right away from a player if they are on the right track.

Once the workout begins, what are main things you are looking for?

It’s NOTHIN BUT NET for Donovan this offseason 💰 @spidadmitchell (via @Cbrickley603) pic.twitter.com/wJIY0y8LWl

I call it the “three-hour rule” when I’m talking about guys who get to the gym and are there for three hours. They do a proper warmup, they’re there for an hour and a half and they do proper recovery and then they do strength and conditioning. Those are the guys that get deals worth more than $100 million. The guys who are in for an hour and then out? Those are usually the guys who fizzle out. I’ve seen it done the right way. I’ve also seen those who haven’t.

What are some questions you think a team or journalist can ask to help identify that?

CB: I think the best thing you can do is ask them what motivates them. It’s so interesting to see some of these guys answer those questions. It can be that they want to make their mom proud or they love the game. But I think it’s huge to ask them why they’re doing what they’re doing. Because teams are hitting up all their old trainers, their AAU coaches, his high school coaches. They’re asking: does he work? Does he like to work? What motivates him? Does he do this because he likes girls or does he play because he wants money or does he love the game?

I think all those things come into play when you’re about to invest millions of dollars into a player. It’s also important to ask them their goals as a rookie. Some guys give unrealistic goals. I think that’s a red flag. Giving realistic goals, like helping your team win, is huge. Ask them what they’ve been working on during pre-draft. See what they say. You know the players’ game. If he says that he is working on something and you’re not sure he should be working on that, that’s good to know.

What are some things prospects do (e.g. fitness, workout, nutrition) do to separate themselves from the rest? 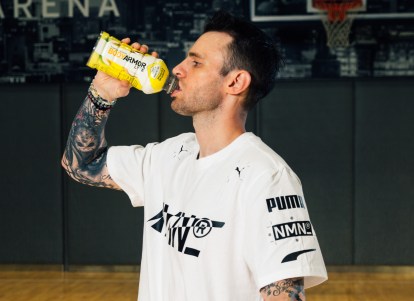 CB: All these young kids coming up have unbelievable talent, so it’s really about how you dedicate yourself to practicing and training, and preparing yourself off-the-court to be the best player you can be. You can do everything right on the court, but if you don’t treat or prepare your body the right way – you won’t have the ability to reach your full potential. When I work with younger prospects, I try to encourage that mentality, and also show them some products or methods that can help them day-in and day-out as they try to be the best they can. Something as simple as staying properly hydrated before, during and after workouts has always been key, no matter which level you play at. For me, BODYARMOR has always been my go-to just because it gives you everything you need to make sure you’re fully hydrated and ready to play at your highest level.

What are some common misconceptions about the pre-draft process?

CB: When you’re a freshman coming out and you’re a senior coming out, it’s completely different. Freshmen have all the potential. But when you get here, are you going to have a good attitude? Seniors, they’re a little bit more mature. Their ceiling is maybe not as high. That’s something I find very interesting. Teams aren’t picking the best player available. It’s tough because so many NBA coaches are getting fired after, like, two years so they want to win right away. But some of the juniors and seniors are way better than the freshmen who get picked way higher. Teams like the San Antonio Spurs have been amazing at finding a young guy who they can afford to really take time to develop.

What do you think is the biggest overall problem with the pre-draft process?

Predraft prospect @tre2mann3 is a sleeper in this years draft. I know they have him mid first round but he can really shoot it off the dribble and off the catch pic.twitter.com/iFGhlUhIrV

CB: You know that whole thing about how teams bring in players for initial workouts? Before the draft, I worked out with Ziaire Williams and he worked out with the New York Knicks the next day. They put so much pressure into these workouts. But in my mind, with the body of work from AAU and college, there’s so much out there. How come we are putting so much pressure on this workout? Some players might have a bad workout but these guys have played hundreds of games. These teams should know what they’re about to get from all these guys.

How would you evaluate how NBA teams are doing in terms of player development?

A look at the Utah Jazz’s Elijah Hughes from a recent workout in NYC. Improved his pretty-looking jumper and refined his skill set (via IG @Cbrickley603) pic.twitter.com/7LW15QkLik

CB: I was talking to Kyle Korver the other day and he told me there were some teams he played for that never cared about player development. They never tried to get in the gym with him. Then he said that there are some that really worked on his player development. He was surprised it wasn’t all that way. But some coaches are more interested in X’s and O’s. I think there is a way to do both.

The Utah Jazz are great at it. Look at Elijah Hughes. There is one of two outcomes for NBA rookies who don’t get a lot of minutes. They either stay the same and lose confidence in themselves or they work hard and improve their skillset and mental approach during the year. So when Elijah came to my workout, for example, he was ten times better than he was just last summer. That’s a testament to Utah.

Sometimes, it is better to go to the G League and destroy dudes. But these first-round picks have a pride thing. But really, what’s the goal? It’s for you to get better. Look at AA and AAA in baseball. Is it a sin for a good baseball player to go down to AAA? The Boston Celtics do a very good job bringing guys down and up.