Craig Randall II hadn’t played in actual basketball games in almost two years. And then, just a few days ago, he was named the G League Player of the Week, while averaging 35.3 points per game.

Randall’s story is unique, to say the least, and it started at the University of Memphis. The 6-foot-4 guard spent his first two years in Memphis but started in only four games, so he transferred to Tennessee-Martin by his junior year. After his last year in college in 2020, he decided to go pro but went undrafted. With the COVID-19 pandemic at full roar, his options were limited.

Despite wanting to play, he passed on overseas options and remained in the States waiting for the perfect opportunity while working out in the gym with his brother.

This season, with hundreds of NBA players entering the health and safety protocols, NBA teams started signing G League players to 10-day hardship deals. As a result, G League teams were also looking for new players to add to their rosters – thus opening up opportunities for Randall.

Randall attended several tryouts and finally got picked up by the Long Island Nets.

A month later, the 25-year old combo guard was named the G League Player of the Week. So far this season, Randall is averaging 25.8 points, 5.0 rebounds, and 5.2 assists per game. To this day, Randall is one of the rare pro players without a Wikipedia page, and a modest social media following (2,200 followers on Instagram, 464 followers on Twitter).

In an interview with HoopsHype, Randall talked about his peculiar journey, his ultimate dream to reach the NBA and more.

How did you start playing basketball? From what I've researched you come from an athletic family.

Talk a little bit about your college days. Playing in Memphis and then transferring to Tennessee. What was going through your mind during that time? 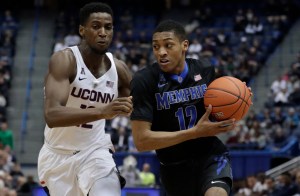 CR: Just trying to find the right fit. Allowing me to be able to show all of my game somewhere. The experience I had in Memphis was great, it helped me, got me stronger, got my mind right. It wasn’t anything personal, me leaving, we just wanted to find a better fit for me, to showcase all of my skills.

Why did you stop playing basketball after college?

CR: I didn’t stop. I got hurt my last year in college and ended up leaving school early to try to get healthy for the NBA draft that year, but it ended up being the COVID year. So, it was just hard to get overseas, I didn’t get drafted, then the G League went to a bubble, but I was working out for a year and a half in a gym every day. I just tried to stay ready and keep my mind focused on when I do get the opportunity to play.

Besides working out every day, what were you doing from the end of college until the G League opportunity came about?

CR: Nothing. I was just in the gym, hanging out with my nephews, spending time with my family, my girl. Just trying to keep my mind focused, stay out of trouble obviously. I kind of just kept my head down and stayed in the gym. That’s really all I did every day. I literally spent every day in the gym.

What made you decide to go in these G League tryouts?

CR: Nobody had seen me in a year and a half, we just thought it’d be a good opportunity to get eyes on me. We knew I was going to get a chance to play this season. I went to the tryouts, did what I knew how to do, and obviously, it came out good for me in the end.

CR: It was a good experience, it was fun. There were other guys there who were also trying to get a job, so just the whole competing, and being able to showcase your skills is always fun. It was obviously a challenge, being able to compete. I enjoyed it though. It was cool.

How many tryouts did you have? How much money did you spend on them?

CR: I think that’s the only one [Long Island Nets] that I ended up paying for ($200). I did three tryouts overall. I did Brooklyn, Orlando, and Memphis.

After the workouts, how did you feel about them? Were you expecting to get picked up?

CR: Yeah, I played well in all three of them. I always try to focus on what I can control, and that’s just doing my job, playing well, showing what I can do. Everything else will take care of itself.

And then from the tryouts, you ended up being named the G League Player of the Week. How did that feel when you found out about it?

CR: It was a humbling, good feeling. It’s a blessing. It just shows that if you put in the work, keep your head down, trust the process, trust God, anything can happen. I was happy with it, I also got to give credit to my teammates and coaches for having confidence in me making plays, and doing what I did that week.

What’s the No. 1 goal you want to accomplish this year?

CR: Honestly, it was just to play again. Getting G League Player of the Week or getting a call-up… obviously, it’s in the back of your head getting a call-up trying to get to the NBA, but all the awards and stuff… I don’t play for that. I play cause I love the game. The goals I had this year is to show that I belong, and have a chance to get called up for Summer League by any team. My goals are still the same, to help my team win as many games as possible, and keep getting better.

What about your longer-term goals? Where do you see yourself in the next five years? What's the dream?

CR: The dream is to be in the NBA. I try not to look too ahead into the future, I try to stay in the moment, I think that’s the best thing you can do, especially for professional basketball, just to enjoy the moment – not a lot of people get this opportunity. In five years I could be in the NBA, could be overseas. Right now, I’m just enjoying this moment.

If an overseas team calls you right now with a good offer, do you take it or will you ride this out and see if it could potentially end up in an NBA opportunity?

CR: I don’t really know. That’s something that I’m going to sit down and discuss with my brother, my dad, my family, my agent. I don’t really worry about off-the-court stuff. I try to make sure that I’m always in practice, always in the games playing my hardest. I just focus on things I can control.

When you finished college, did you have any overseas offers you considered?

CR: Not that I can remember. I probably could’ve ended up going to a smaller country, playing for not as much of a good league. We just chose to wait it out, but I’m happy with where I am right now.

Talk a little bit about your playing style on the court. What are some things you feel like you excel on and things you need to improve your game on?

CR: I think can get better at a lot of things. Making plays for others, being better on the defensive end of the court. The things that I bring… high energy, I play as hard as I can each possession, trying to get my teammates involved. Just being out there, and doing what I know I can do, helps me out.

Looking at the league now, with which players would you compare your game to?

CR: Russell Westbrook has a crazy motor, playing that hard. But I don’t really compare my game to a lot of people, cause everybody’s different. My brother is really big on just perfecting what I’m good at. We keep hitting the things that I’m good at and then adding some stuff every once in a while. I like a lot of guys in the league. Everybody wants to shoot like Steph Curry, try to make as many shots as possible. Getting downhill like Westbrook, guys like De’Aaron Fox using speed, and playing on both sides of the court. I try to just watch and study the game, and pull things from everybody.

What motivates you every day to keep going?

CR: This is all I know. Where I’m from, not a lot of people make it out of my city. I got my city behind me, my family, I just try to remember that I’m not doing this just for myself. There are a lot of people who are in my position, where they go to local tryouts and think they are not going to make it. I try to just keep my mind clear, and do it for people who I know didn’t get the opportunity.