DJ Strawberry advice to young players overseas: 'Set the bar of the NBA and go from there'

DJ Strawberry advice to young players overseas: 'Set the bar of the NBA and go from there'

Ahead of the quarterfinals in the Basketball Africa League (BAL) playoffs, one-time NBA guard DJ Strawberry spoke with HoopsHype after a recent practice with Zamalek.

Zamalek is looking to defend its title at Kigali Arena in Rwanda. The White Knights previously won all five conference games at home in Cairo this season, and just blew out the Seydou Legacy Athlétique Club in the quarterfinals.

How are you guys preparing for this tournament? As defending champions, how confident are you and the team about repeating?

DJ Strawberry: We are ready to defend our title. The guys here have been practicing hard. It’s not easy to win even at this level, and other teams are gearing for us. We’re very confident, and we come here to win it.

What would you tell younger players who are trying to make the NBA?

DJS: Confidence is key. I tell other guys all the time you could interchange 4-5 EuroLeague guys on a team to the NBA and they can excel. At this level, the talent is all there, it’s mostly a mental game.

Seeing your father's struggles during his playing career, how did you use that to help you deal with your own struggles overseas?

DJS: My father [Darryl Strawberry] helped me (throughout Strawberry’s overseas career), especially watching him go through his battles while I grew up. It helped me get through a lot of what I did over my career.

What would you tell younger players who are trying to make the NBA?

DJS: Set the high bar of the NBA and go from there. Just remember that the NBA is not the only success out there. There is money to be made at the EuroLeague level. Aim for the NBA as a goal, but continue to work hard, and everything else will play out.

Do you want another cup of tea back in the NBA?

DS: In terms of last wanting to play in the NBA, probably during the last lockout (in 2011). After that, I was comfortable playing in Europe. I no longer had the desire to come back and play in the NBA.

Back in high school, did you feel you were responsible for matching up against LeBron James and holding him to 8-for-24 shooting?

DJS: I want to make it known that I was not responsible for [LeBron] James in having that performance. LeBron is a one-of-one talent, and there is no way that I or anyone else could have stopped him. He just had a bad night shooting. 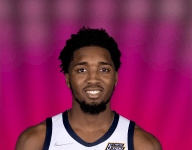