In the NBA, a player’s contract year is a very real thing, where guys who are about to hit free agency see their value go way up or down depending on how they do specifically in the last season of their previous deals.

Below, we begin a series ahead of 2022 free agency where we examine certain players’ stock.

This season, Andre Drummond is the 321st highest-paid player in the league, earning $2.4 million. Lately, he’s playing like a man trying to earn a whole lot more than that next season.

Since joining the Brooklyn Nets, the big man is averaging 11.4 points and 9.6 rebounds while shooting 62.5 percent from the floor. More importantly, he’s making a positive impact during his time on the floor, with the Nets performing 2.7 points per 100 possessions better with him in the game as opposed to when he sits.

Drummond’s finishing down low, rebounding and defensive focus have been particularly impressive in his short stint with Brooklyn, as he’s making a difference with his time on the floor as opposed to looking for his own stats.

If Drummond is able to keep up that level of impact in what will be a playoff run for the Nets with a ton of eyes on it, there’s no doubt he’ll be able to earn himself more than a veteran minimum contract.

Much was made about Dennis Schroeder reportedly turning down a huge contract extension from the Los Angeles Lakers last year before being forced to sign with the Boston Celtics for far less money the following offseason, one-year and $5.9 million to be exact, making him the 89th highest-paid guard in 2021-22.

Well, things aren’t getting much better for the German floor general, who has only seen his free-agent value dwindle even more since getting traded to the Houston Rockets.

What’s more, in what was already a trend during his time with Boston, Schroeder’s time on the floor has been a negative for his team, with the Celtics and Rockets being 7.7 points per 100 possessions worse with him running the show.

Without much time left in the season to turn things around and the Rockets basically guaranteed not to make the playoffs, Schroeder might be looking at another cheap, one-year deal this offseason.

Maybe he should have fought harder for a buyout with Houston.

Anyone who has watched the Orlando Magic this season knows Mo Bamba has been playing the best basketball of his career in 2021-22. The 7-footer is putting up 10.3 points, 8.0 rebounds and 1.7 blocks per game while shooting 36.3 percent from beyond the arc, placing him in the invaluable archetype of shot-blocking floor-spacer.

And for those who want to argue that Bamba is only doing this because the Magic are one of the worst teams in the league, allowing the big man to play a larger role than he would have on a playoff contender, consider that Bamba is actually putting up the best stats of his career while also posting the lowest usage rate of his time in the NBA at 16.8 percent.

Will it be enough to get a team, be it the Magic or another, to give Bamba a big deal this summer?

Probably not, but Bamba may have played his way into at least a mid-sized contract by showing his propensity for shot-blocking and shooting this campaign.

It feels like a long time ago when Robert Covington was seen as a legitimate difference-maker with 3-and-D prowess and multi-positional defensive capabilities as his top specialties.

Now, the 31-year-old seems to have lost a step while still not possessing the reliability as a shooter that could make him more impactful.

Covington is shooting just 39.8 percent from the floor this season and his defense, although still able to cause havoc when he’s healthy, isn’t what it once was, as Covington’s foot speed appears to have lessened from what it was in his athletic prime.

Often, Covington can be seen getting blown by on the perimeter by opposing wings, and his offense isn’t consistent enough to make up for that.

Those who follow the NBA closely know that Tyus Jones has always been an analytics darling, a player who the advanced stats value far more highly than the raw statistics would indicate they should.

But fans of the Memphis Grizzlies and Minnesota Timberwolves know that Jones is a far more impactful player than the average fan may realize. Jones can run a second-unit offense at a high level and defend his tail off, especially against fellow point guards.

Jones’ raw stats – 8.1 points, 4.1 assists and 0.9 steals – don’t jump off the page, but the fact that he’s able to do that in just over 20.0 minutes nightly is beyond impressive and makes one wonder what his numbers might look like in a bigger role elsewhere.

Would Jones be a star on a team where he didn’t have to back up an MVP candidate like Ja Morant?

Probably not, but as a second-unit point guard, Jones is one of the most effective options in the league.

It almost feels unfair to post Lou Williams here considering the legacy he’s created in his career – he’ll go down as one of the greatest Sixth Men ever –and the fact that he has said himself he might retire after this season, but just watching him play, it’s clear the score-first guard has lost a step.

Gone are the days when Williams could be counted on any given night to give foes buckets off the bench with aplomb, mostly from the midrange but even from beyond the arc. It’s just shocking how quickly Williams’ downswing has happened, even accounting for the fact he’s already 35 and been in the NBA since 2005-06.

Just two seasons ago, Williams was still averaging 18.2 points and 5.6 assists… off the bench.

Now, his numbers are down to 6.5 points and 1.9 assists nightly while making the Atlanta Hawks 2.6 points per 100 possessions worse when he’s on the floor.

If this season is it for Williams, then what a career he had.

But if he decides to go on for longer, there’s no doubt the once-exciting scorer has hurt his free-agent value with his play this season. 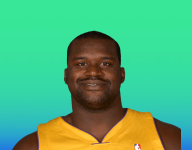