George Gervin: 'These youngsters still bring my name up. How special is that?'

George Gervin: 'These youngsters still bring my name up. How special is that?'

The Hall of Famer, famously nicknamed The Iceman, is a nine-time NBA All-Star and four-time NBA scoring champion who averaged more than 26 points per game during his time in the league. Standing at 6-foot-7, Gervin still has a legacy as one of the greatest shooters – with perhaps the prettiest finger roll – to ever play the game.

Gervin recently caught up with HoopsHype to discuss his thoughts on the season, what he has seen from Spurs coach Gregg Popovich, why he thinks San Antonio guard Dejounte Murray should be an All-Star, some recent comments from Kyle Kuzma, and plenty more.

This interview has been condensed and edited for clarity.

How have you seen San Antonio grow as a basketball team since the early 1970s? 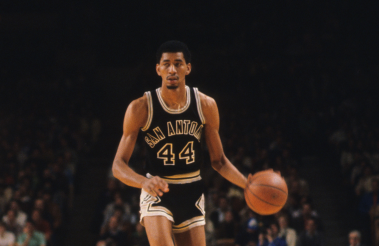 George Gervin: I’m still in the front office and they won’t get rid of me! I’m proud of that. [Laughs] To see San Antonio come from my era to David Robinson to Tim Duncan, it’s been such an incredible journey. We were winning divisional titles when I played. They had potential when David first started. But when Timmy came and played with David, it really just put us at another level coming out of the ABA merger. For me, it’s unbelievable. As you watch the game today, it’s more ABA-ish. It’s more fast-paced. It’s more games with 120 points, 125 points. It’s three-point shots. The game is played outside in, as opposed to when I played inside out. Through my lens, I’ve seen a lot. But I still enjoy the game.

Do you think there was ever a serious risk of San Antonio potentially relocating? 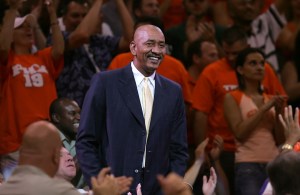 GG: I know ownership. Remember, you’re in Texas. They don’t usually let nothin’ get away. [Laughs] Fortunately for me, all of the ownership here was local. So a lot of them grew up with me. A lot of them appreciate my contribution to the franchise. I believe that’s why I’m still here in the front office. It’s because of the loyalty they have to what we brought here to San Antonio, what, 40 years ago?

You replaced Gregg Popovich as an assistant coach in 1992. What do you make of his impact on the game? 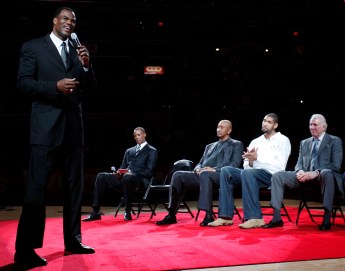 GG: Ain’t that something? [Laughs] It’s crazy, man. I remember when he was general manager and then when he decided to make the transition from GM to coaching. He brought a system in here that proved to work. You had the talent. You had David. Then you had Timmy. You had Manu Ginobili and you had Tony Parker. We were winning championships with so many international players that fit his system. I don’t think Ginobili gets the credit he deserves. I don’t think Tony gets the credit he deserves, either. Tony led the league in points in the paint. He isn’t much bigger than 6-foot! He was quick. Popovich used to beat on him, though. Pop used to stay on him. Pop made him better. I saw the development. I got a lot of respect for Pop and his ability to understand how to win and bring in guys who understand how to fit his system. The guys believe in him. The guys love Pop! That’s special. I ain’t got nothin’ but respect for Pop.

How do you describe the archetypal “Spurs Draft Pick” that the team targets? 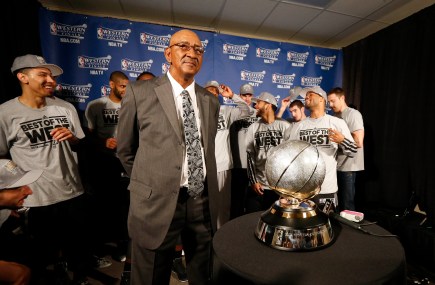 Guys are sensitive. You see it all over the league. Somebody will holler at them from the stands. They’ll talk back. When we came up, I wouldn’t give a guy an opportunity to know I recognized what he said. Now all of a sudden, he’s a part of the game. I wouldn’t give him that pleasure. I ain’t that sensitive. Ain’t nothing you can do to me. I think it’s just so important for guys to recognize that. Just don’t touch me. But say what you want to say. I don’t hear you. Because if I hear you, I ain’t focused on the game. That’s what Pop finds in his players.

Kyle Kuzma recently shouted you out after Evan Mobley hit a finger roll on him. What did you think of that?

You damn right I’m going to dap him up. I just saw the closest thing to George Gervin in the flesh!!! https://t.co/zGQvTH4Lo2

GG: Somebody sent me that! [Laughs] I can’t be anything but humbled. He wasn’t around when I played. You understand what I’m saying. I’ll be 70 years old this year. These youngsters still bring my name up. How special is that?

Who do you think has the prettiest finger roll in league history besides yourself?

GG: Wow, man! I’ve seen Ginobili throw some left-handed finger rolls that made me say: “Oh, no, now that is a finger roll.” A lot of these announcers today call something a finger roll and I will watch it and say: “Now that ain’t no finger roll, man. Where did you get that from?” I’ve seen Stephen Curry throw some. But I don’t see it much.

Is there anybody in the league who reminds you of yourself when you watch them play?

If you’re having a discussion about the greatest scorers in pro hoops history, it must include George Gervin.

He was Kevin Durant 25 years before KD. pic.twitter.com/njgOpsJB06

GG: Everybody used to tell me it’s Kevin Durant. I think they say that because of our size. He is taller than I am and he can put it on the floor and he can shoot it from three, way deeper than I ever could, by all means. He can shoot it from midrange. He don’t go to the hole like I did, left and right-handed, throwing a right-handed hook and stuff.

I don’t want to say that I don’t see anybody as creative as I was going to the hole. But maybe I am saying that. You know? That was one of my things. If I could get by you, I’m going to the hole and lay it up on you some kind of way. Or I’m going to finger roll on you. That all comes from creating a mindset that I can shoot the jumper. So you come up on me and I’ll go by you. 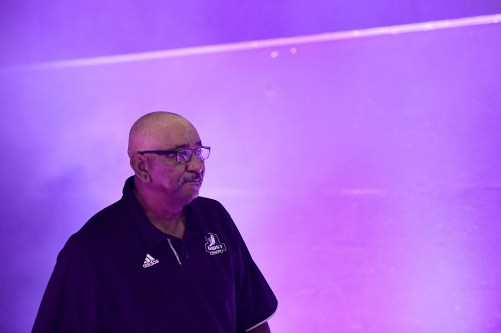 GG: These guys play hard! Everybody knows that if you’re playing against these guys, these kids are going to play hard. They’re learning how to win. They are in a lot of games. They’re just not finishing. That’s youth. I think the man on the team is Dejounte Murray. I think he’s an All-Star myself. I think he’s playing in the All-Star range. I really do hope. It would be good for him and it would be good for San Antonio. He’s unbelievably talented and I think he’s getting better and better. He’s going to get to that phase where he just knows how to win. The real teacher is on the floor during an in-game situation. That takes time. I think Popovich will come up with something and make us a winner. He normally does. The guys are just young right now.

What are some of your other impressions of the 75th anniversary season so far? 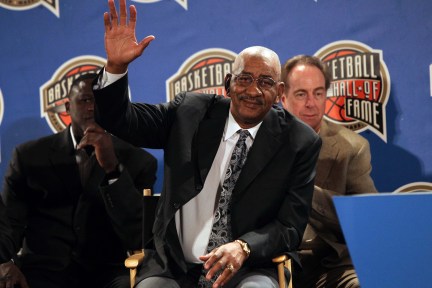 GG: You start looking at who’s winning. Injuries always play a part. I’m pretty impressed with Phoenix. They had a good run last year but they’ve proven this year that it wasn’t a joke. They are fun to see. When they came to San Antonio, they ran us out of the gym. Devin Booker had 48 points. That was exciting to see.

Then in the East, I’m glad to see Kyrie Irving back but then Kevin Durant went down. You can never count Milwaukee out. They’re the champs. If everyone stays healthy, they can be tough to beat. If the Greek Freak keeps shooting that midrange jumper, then they’re going to be really hard to beat! [Laughs] That’s how I’ve been looking at it. 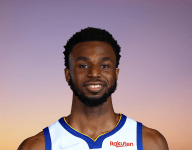