John Wall and the Houston Rockets have mutually agreed to work on a separation, according to Shams Charania. Wall will still remain with the team but won’t play in games in order to preserve his trade value. It shouldn’t come as a surprise that Wall isn’t in Houston’s plans since they are in a full-scale rebuild. His services are best suited on a contender.

This decision will allow the Rockets to dedicate all their minutes to their young guards, a promising group which includes Jalen Green and Kevin Porter Jr. Both are now set to start at the guard positions with Wall out of the picture, which should also guarantee minutes to other young guards such as Josh Christopher and Anthony Lamb.

Although both sides are in agreement that a separation is for the best, one might not come anytime soon. The lack of trade suitors for Wall, as well as a potentially punitive buy-out amount, could keep him shelved in Houston throughout the 2021-22 season.

There are several contenders that could use Wall right now as both a starter or reserve. Unfortunately, it’s really hard for front offices to justify trading for him with his contract. Wall is owed $91.7 million through 2022-23, which includes a $47.4 million player option he is likely to pick up. He can improve many teams but he is unlikely to perform at the value of his contract.

A team that trades for Wall would have to send back at least $35.3 million to match salaries. It’s very hard to come up with that much matching salary, and just about every team has their point guard situation settled anyways. There really aren’t any realistic trade scenarios for Houston where teams are acquiring Wall for the player instead of the contract. They can hold out for a trade through the deadline and hope the market changes, but it’s hard to see a separation come in any form other than a buyout.

If a team does trade for Wall, it will likely be as part of a salary dump with plans to waive him afterward. One team that makes sense is the Oklahoma City Thunder who are currently over the cap but have the ability to generate north of $32 million in cap space. They would just need to send back the difference between Wall’s salary and their cap space amount to absorb him. For example, they could send back Derrick Favors ($9.7 million) and another player earning $2 million for Wall.

Such a trade will likely cost Houston draft capital but according to Tim MacMahon, they do not want to give up first-round picks to get off Wall. The Rockets are already down several draft picks to Oklahoma City thanks to the Russell Westbrook trade. Houston needs as many bites at the apple as possible during their rebuild and probably don’t want to get off any picks, especially since trading for Westbrook cost them draft picks and eventually led them to being stuck with Wall.

A buyout won't come cheap, and there's no guarantee Wall makes it back

If no trade materializes, Wall’s only way to leave Houston before 2023 would be through a buyout. With Wall, Houston is capped out but well below the luxury tax over the next two seasons. Getting off Wall could potentially allow them to generate significant cap space in 2022. If they trade assets to get off Wall for expiring contracts, they could look to recoup those assets and more by facilitating salary dumps with their cap space.

Charania and MacMahon both add that the Rockets don’t want to negotiate a buyout at this time, but that could change depending on how much Wall is willing to give up. Kemba Walker gave back $20 million in his buyout with Oklahoma City, but he immediately recouped almost all of it in his new deal with the New York Knicks. Wall would have to give back around $25 million for his buyout to be proportional to Walker’s, which may be the starting point for Houston in negotiations.

The issue with giving back that much money is that Wall is unlikely to find a significant deal right now that comes close to making up for some of his lost money. Many contenders like the Lakers, Clippers, Nets, Sixers, and Bucks can only offer Wall the veteran minimum worth $2.6 million. Teams that still have all or most of their mid-level exception (MLE) include the Cavaliers, Hawks, Nuggets, Pelicans, Timberwolves, Trail Blazers, Warriors, and Wizards. With the exception of the Pelicans, all those teams have luxury tax and/or hard cap difficulties that would complicate offering Wall their MLE.

DeAndre Jordan recently gave back $4 million in his buyout with the Pistons, which is less than the equivalent of two veteran minimum contracts. It seems unlikely that the Rockets would go that low with Wall considering the amount he’s owed. With no clear path for him to earn more than the veteran minimum this season, it’s possible that a separation is shelved until next offseason. By then, Wall will only be owed $47 million and the market will reset. He will have a much better opportunity next summer to secure a deal at above the veteran minimum. 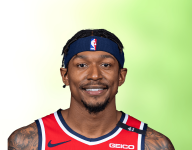