Scotto: The biggest drop-off for Randle this season has been his three-point shooting. It was 41 percent last year. It’s down to 31 percent this year. He played his best in a contract year, and then the Knicks extended him. They thought it would look like a good contract with the salary cap potentially going up in the years to come, but it’s been an up and down season for Randle.

Bondy: Last season, you were kind of worried that this was an anomaly. He never shot that well from beyond the arc in his career. He can’t sustain it. As it turns out, he couldn’t. This has been a bigger drop-off than I think anyone expected in terms of his three-point shot. That’s been probably the biggest issue on the court. You also have to compound that he hasn’t been a great leader, to put it frankly. He’s had temper tantrums. He had the situation with the fans where he put the thumbs down and dropped the f-bomb that he got fined. He pushed Phoenix’s Cam Johnson, which warranted an ejection and probably cost the Knicks that game.

I think people downplayed it that he lost two of his best friends on the team, Reggie Bullock and Elfrid Payton. That might have hurt him in terms of his psyche and being able to bond and mesh with the chemistry of the team. It was so apparent last season, and it just isn’t there.

Scotto: You look at the team now, and they’ve gone more towards a youth movement at the end of the season, playing the younger guys more minutes. We heard his name kicked around a little bit at the trade deadline. You heard stuff about Randle with the Sacramento Kings before they got Domantas Sabonis. Then, Randle lit it up in Sacramento like Times Square on New Year’s Eve. Stefan, do you think there’s a possibility Randle could be traded this summer?

Bondy: Yeah, I think there’s a possibility, but I will caution that any talk of Randle getting traded at the deadline, I think there wasn’t much to it. There might have been some calls here and there, but nothing ever got serious at all. I think the Knicks are smart enough to understand why would they trade this guy at his lowest point when we wouldn’t get much back for him?

You mentioned the extension. It’s not a max contract, so it’s not like he’s going to start making $30 million off the bat next season. It’s still a very reasonable contract in terms of today’s NBA, and when you look at these insane numbers being thrown around for players who don’t produce as much as Randle. I still think he’s an asset. I think he’s going to have nights like he had in Sacramento. You hope next season will be different.

Scotto: RJ has certainly become more assertive this year with his scoring. He struggled early on shooting the ball, but we’ve seen him gain more confidence. Is he going to be a guy that eventually develops into an All-Star? That draft where they got the third pick, even though they had the worst record in the league, and they didn’t get Zion Williamson or Ja Morant and got RJ. Is RJ eventually going to be a guy that they flip in a trade? The Knicks are always involved in speculation about getting an All-Star, whether it’s Donovan Mitchell or someone else.

Bondy: The Knicks have not re-signed a player that they drafted to a second contract coming off their rookie deal since Charlie Ward. That’s how long it has been. He’s up for an extension after the season coming off his rookie deal. I think the Knicks view him as a future cornerstone piece. You’re correct in saying he’s their most valuable trade piece. If they are going to go after Donovan Mitchell or whoever, he would be their most enticing piece.

Scotto: I spoke to five NBA executives, and I asked them what in their mind is Mitchell Robinson’s projected free agency value as of today? According to those executives, his worst-case scenario is the non-taxpayer mid-level exception, but generally, the projected range for him is between $12-13 million annually, which would be more than what Nerlens Noel got previously in free agency with the Knicks. Most executives think with the Knicks having Robinson’s Bird Rights, most around the league don’t see him walking for nothing.

Bondy: Mitchell Robinson is eligible for an extension. They can sign him and not let him hit free agency, but the extension is capped at four years, $55 million. The last I heard was whatever extension talks they were having, they weren’t close on anything.

Scotto: One executive told me, “I think the Knicks re-sign him and maybe overpay to do so to keep him as an asset. It’ll be a tough negotiation given what they gave Nerlens Noel.”

Another executive said, “He’s talented as a rim protector and elite on the offensive glass. He’s good offensively in the dunker area, and he can finish at a high clip, but he has no perimeter game and has a bit of an injury history.”

One executive told me he could see him getting $15 million if it becomes a bidding war because he’s an unrestricted free agent.

Bondy: Two teams that have been rumored to be linked to him are Detroit and Dallas.

Scotto: Detroit is a team I’ve heard that has interest in him. They’ll be linked to Deandre Ayton as well. The price gap between Mitchell Robinson and Ayton is going to be pretty significant. If Detroit can get other free-agent acquisitions, I think they’re certainly going to look at Robinson. Harold Ellis, who used to work for the Knicks, is with Detroit, so they’ve got some good inside knowledge on Robinson there.

Scotto: In talking with multiple executives around the league, they think Nerlens Noel is a trade candidate. I agree. I reported on the three-team trade talks with the Knicks, Lakers, and Raptors. Noel was going to be a part of that. For those teams to get that in-depth on parameters with players, they were in serious talks about it. I certainly think there’s a possibility Noel gets moved.

17:55 What are the chances Kemba Walker is traded?

Scotto: Nerlens Noel isn’t the only guy you think of regarding a trade. Kemba Walker is another guy. The Knicks get former stars that are past their prime a little bit like Joakim Noah, Steve Francis, Tracy McGrady, and Penny Hardaway. Kemba was a great feel-good story. It just hasn’t worked out.

One GM told me he was concerned about trading for Kemba because of his knees and his limited availability on back-to-back games. I think, ultimately, the Knicks will be able to move him in the summer. I’m not sure what the price will be.

Bondy: I think he will be moved. He’s an expiring contract, so you’re not attaching too much money to him. They won’t get much back in terms of value, but they’ll be able to move him. Even before they signed him, it was a risk. His knees have been a problem for a while. The Knicks knew his arthritic knee was going to be an issue, and it became an issue where he had to sit out long extended periods of time.

Scotto: I remember one executive who spoke about Cam Reddish and said, “I’m on the fence with him. He’s the right type of player who could be really good, but he could easily be a bust too.”

Bondy: I think they’re open to trading him. They don’t want to trade him because they just gave up a first-round pick for him. If they get anything less than a first-round pick back for him, that would symbolize the trade was a big mistake already. I don’t think they want to make that concession. They want to give Cam Reddish another year. He’s under contract for next season. They don’t have to give him an extension. I don’t think they will based on what they’ve seen from him so far. He will be a restricted free agent if they get that far in 2023.

Scotto: One executive told me if he was running the Knicks next year, he’d want to start Immanuel Quickley, RJ Barrett, and Cam Reddish. I remember another executive said to me, “The worst thing that happened to the Knicks was what happened last year when they overachieved, got the fourth seed, had unrealistic expectations, and then they went out and got Kemba Walker and Evan Fournier.”

Scotto: What is the view of Evan Fournier within the Knicks right now, looking ahead towards the future?

Bondy: I don’t know what they’re going to do in the future, but he was one of the names they were kicking around before the trade deadline. They were pitching a lot of people, but he was one of them for sure. What does that symbolize? He’s a guy that, given the right opportunity and price, he’s a guy they’d move on from. He’s also a guy they gave over $70 million in a contract last summer. That tells you exactly what they think of that decision.

Scotto: Have you heard anything on Thibodeau’s future and what the front office is thinking with the direction for this team going into the summer?

Bondy: I did hear what’s been out there, which is William Wesley, Worldwide Wes, has been going around, and it’s not just been to James Dolan, other people have heard this as well from Wes, that Thibodeau is at least partially or mostly to blame for what’s happening right now. I heard specifically, and this was a couple of weeks ago, that Wesley was saying Thibodeau hadn’t been giving the young players a chance and that the team should be better. When you have a high-ranking executive like that talking about the coach in that way, yeah, there’s cause for concern.

To me, that’s the biggest storyline now for the rest of the season. How will this team play for Thibodeau? Will it help or hurt his cause to keep his job?

NBA draft: The best players ever at each position 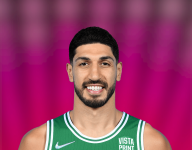