If you’re like the vast majority of people, odds are, you hadn’t heard much – if anything – about Miami Heat guard Max Strus prior to his performance against the Houston Rockets on Thursday night.

Strus had the best game of his professional career, putting up 21 points on six-of-nine shooting, including five three-pointers, in a 101-94 win for Miami. Strus’ one field goal that wasn’t a three-pointer, by the way?

That was a dunk on – at the very least, in the vicinity of – five-time All-Star John Wall:

Strus’ analytic-friendly performance is nothing new for him this season, as the bouncy 2-guard takes the vast majority of his shot attempts either from three or near the rim. His shot chart for 2020-21 resembles a painting Daryl Morey would hang on his wall: 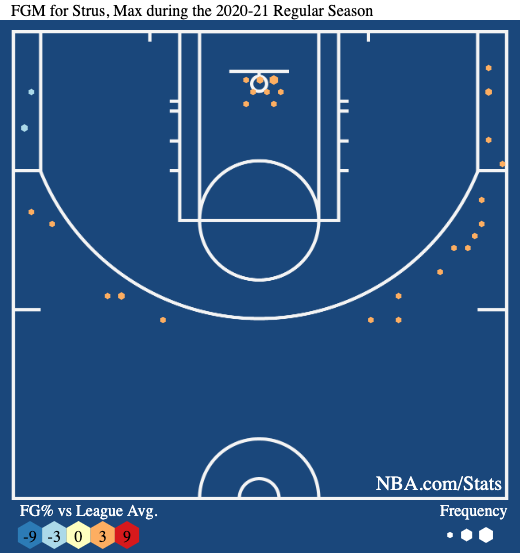 Thus far in his young career, Strus has only seen action in 16 NBA games, two for the Chicago Bulls and 14 with the Heat, but his latest performances indicate he could be a player to keep an eye on going forward.

Below, check out some fun facts about the 24-year-old.

1
He was 5-foot-9 until his sophomore year in high school and originally preferred football and baseball...

Strus was a late-bloomer physically, as the current Heat role player was just 5-foot-9 until his sophomore year in high school.

Not only that, but Strus’ first love wasn’t even basketball. In high school, he played football until two collarbone breaks in five years led to him quitting the sport.

He also played baseball all four years as a pitcher and considered pursuing that sport in college, like his dad did at Eastern Illinois, before undergoing a growth spurt and deciding on basketball.

2
He only had one Division I offer coming out of high school...

Coming out of high school, despite playing in the talent-rich area of Illinois and averaging 19 points per game his senior year, Strus only had one offer from a Division I program… and that was from Chicago State.

Strus turned it town and opted to start his college career elsewhere.

3
He began his college career and spent two seasons at the Division II level...

Similar to current teammate Duncan Robinson’s journey, Strus excelled at a non-Division-I program before finishing his college career at the Division I level. The first two years of Strus’ college career were spent at Lewis University, a Division II program in his home state of Illinois.

Over those two years, Strus shined, averaging first 13.3 points as a freshman and then 20.2 points, 8.4 rebounds and 3.5 assists as a sophomore, a campaign that saw him be named an honorable mention Division II All-American.

After those two seasons, Strus would decide to sit out a year and transfer to a D I program, and interest in him was high.

4
He chose DePaul over Butler, Louisville, Oregon and Xavier...

Major programs came calling for Strus after his impressive D-II career, including the likes of Louisville, Oregon, Butler and Xavier, a list that includes two universities that have competed – or won – national titles within the past 15 years.

But Strus would end up choosing DePaul, partially due to its proximity to home and partially because his mother was a two-sport star at the program in the late-70s and early-80s in both basketball and volleyball, and is a member of the school’s Athletics Hall of Fame.

Strus enjoyed a great two seasons at DePaul, averaging over 20 points as a senior and being named a 2nd Team All-Big East member. He is third all-time in program history with 194 threes made.

5
He worked out for a ton of NBA teams before going undrafted...

After an impressive, albeit long-winding, college career, Strus, thanks to his picture-perfect three-point stroke and deceptive athleticism, received a good amount of interest ahead 2019 draft, but would end up going undrafted.

Among the teams we have reports on Strus working out for, or in front of, prior to the draft are the Atlanta Hawks, Brooklyn Nets, Philadelphia 76ers and New York Knicks.

6
He signed his first pro contract with the Boston Celtics but lost that job because of Tacko Fall...

Strus’ NBA journey began when he joined the Boston Celtics’ Summer League team in 2019, and after performing at a solid level in that competition, averaging nine points and shooting 45 percent from three, Boston signed him to a two-way contract.

However, the Celtics’ addition of Tacko Fall to a two-way contract cost Strus that spot, but rather than waive him outright, Boston converted his contract to a standard deal, allowing him to compete with Javonte Green for the final place on their roster.

Green would win that competition and the Celtics waived Strus prior to the 2019-20 campaign.

7
His first NBA game actually came against the Miami Heat...

After his brief stint with the Celtics, Strus would sign a two-way contract with the Chicago Bulls, where he’d see his first taste of NBA action.

The first game of his NBA career coincidentally enough came against his current team, the Heat, on Nov. 22, 2019. Strus saw some garbage-time action that night, scoring five points in just under five minutes of action.

Apart from that, Strus’ Bulls career would last just one more game, a one-minute, zero-point performance against the Portland Trail Blazers in late November 2019.

8
He suffered a devastating knee injury while on a G League stint...

Right before Christmas 2019, Strus would suffer a major knee injury while playing with Chicago’s G League affiliate, suffering a torn ACL and a knee bruise to his left knee during the G League Winter Showcase.

Strus would be finally cleared from the injury almost nine months after the fact, on October 21, 2020.

9
He already has the respect of teammates Jimmy Butler and Goran Dragic...

Strus’ career is only just now starting to gain some team, but All-Star teammates Jimmy Butler and Goran Dragic have already praised their young teammate.

Dragic had the following to say about Strus back in December before this season even began:

Goran Dragic on Max Strus: "Max, he's a solid, solid basketball player. He can shoot the ball. He's really strong for his position. I see some good stuff from him."

And Butler had the following to say about Strus after his mini-explosion against the Rockets (via the Sun-Sentinel):

In joining a team months removed from an appearance in the NBA Finals, Strus (pronounced Stroos) easily could have found himself as an outsider, particularly while playing on a two-way contract. Instead, Jimmy Butler, who closed Thursday’s victory with a triple-double, has made a point of imploring Strus to do what he does best. “I see him shoot the ball when nobody’s looking,” Butler said. “The amount of reps that he puts in, I want you to do what you’re comfortable doing.” … “Every time I get on the court, Jimmy says, ‘Every time I pass you the ball, shoot the ball,’ ” Strus related. “So just having him have that confidence in me is extremely helpful and gives me confidence. “When you’re playing with no weight on your shoulders, it’s easy.”

Of course, it wouldn’t be a Jimmy Butler quote without some profanity, so we should also add one more thing the star forward had to say about Strus after his performance in Houston: “He’s really f—— good.”

Shaquille Harrison would be a perfect signing for the Brooklyn Nets