The NBA is considered the best league in the world, but that doesn’t mean there isn’t NBA-caliber talent playing outside the United States.

So who are some of the top international players currently overseas playing well or could make the jump to the NBA?

To gauge who are the top international players, HoopsHype polled 15 NBA talent evaluators, including 10 executives and five scouts. Each talent evaluator was asked to list his top five international players. The criteria included any player pro player not in the NBA right now. Some of the talent evaluators prioritized former NBA players and older veterans who are having an immediate impact on their team overseas. Others placed a higher value on younger prospects who are likely to come to the NBA in upcoming drafts.

Share of the vote: 54.67 percent of the maximum amount possible

Mirotic began his career overseas with Real Madrid, spent five seasons in the NBA, and then surprised many NBA executives by returning overseas with Barcelona in 2019 in the prime of his career.

The 30-year-old forward is shooting an astounding 59.7 percent from the field and 47.2 percent from beyond the arc while scoring 15.9 points per game.

“He’s the guy that’s been most productive in the NBA, and someone you can put in an NBA game right now if you had to,” one NBA executive told HoopsHype.

Share of the vote: 36 percent of the maximum amount possible

Giddey signed with Adelaide as part of the NBL’s Next Stars program. Since then, he’s proven worthy of the honor by averaging 10.8 points, 6.9 rebounds, 6.9 assists, and 1.2 steals per game. Earlier this month, Giddey showed growth off the court too, measuring over 6-foot-9 according to his agent, Daniel Moldovan of Octagon.

“He has great size and excellent court vision,” an NBA executive told HoopsHype. “He sees the floor so well, and he’s probably too unselfish at times. His shooting will need a lot of work. He needs to become a consistent threat from three and he needs to improve at the line, but he’s playing in a tough league at a young age and he’s having success.”

During the podcast, Giddey also compared his game to an All-Star and fellow Australian.

“Right now, in a non-cocky or arrogant way, I’d probably say similar to Ben Simmons,” Giddey said on the HoopsHype podcast earlier in April. “Not just in the fact that we’re big point guards, but the fact that we both love and our strongest asset is playmaking, passing the ball, getting guys looks, getting out in transition, and making stuff happen. I think in a light comparison, I’d put Ben as the guy.”

Share of the vote: 29.33 percent of the maximum amount possible

Micic, 27, has played well for Anadolu Efes averaging 15.2 points and 4.6 assists per game on 48.3 percent shooting from the field.

“He has good size for a point guard. He’s a good passer, has vision, IQ, and feel,” one NBA executive told HoopsHype. “He’s an improved shooter, but lacks elite athleticism at both ends of the court.”

The 6-foot-5 Serbian guard has his draft rights retained currently by the Thunder. While some have speculated he could make the jump to the NBA, his agent, Misko Raznatovic, denied having talks with any clubs for next season at this time. Still, Micic has drawn the attention of NBA teams with his play.

“He’s almost an elite passer,” one NBA scout told HoopsHype. “He’s a good shooter, both on and off the dribble. He’s not athletic but has enough strength after his first step to get at the rim once he gets a runway. He’s very smart. His basketball IQ is off the charts.”

Share of the vote: 26.67 percent of the maximum amount possible

Larkin, the son of MLB Hall of Fame shortstop Barry, spent four seasons in the NBA after being selected 18th overall in the 2013 draft. He last appeared in the NBA during the 2017-18 season with the Boston Celtics.

Overseas, Larkin has become an improved shooter from downtown shooting 41.1, 45.4, and 42 percent over the past three seasons with Anadolu Efes. At 28, he’s in the prime of his career overseas and a potential candidate to return to the NBA.

“He’s been excelling with his speed and quickness in transition and the halfcourt,” an NBA scout told HoopsHpe. “He’s creating separation on rim scores or kick-outs and he’s making threes both spotting up and stepping into his shot.”

Share of the vote: 22.67 percent of the maximum amount possible

Wembanyama is filled with immense potential and has NBA executives salivating at what he could become years down the line, which could be a combination of Rudy Gobert and Kristaps Porzingis. The 17-year-old center already stands 7-foot-3.

For more background on Wembanyama, check out this story on HoopsHype.

Share of the vote: 17.33 percent of the maximum amount possible

Garuba, 19, plays just under 16 minutes per game for Real Madrid, but NBA teams are intrigued by his long-term upside. According to the HoopsHype aggregate mock draft, the 6-foot-8 big man is currently a top-20 projected first-round pick.

“He’s a multi-position defender, who is strong as an ox with a developing offensive game,” an NBA scout told HoopsHype.

Share of the vote: 14.67 percent of the maximum amount possible

Nedovic, 29, has been an efficient shooter for Panathinaikos this season from the field at 45.5 percent and from beyond the arc at 41.7 percent while averaging 15.6 points per game.

“He’s an athletic combo guard with decent size and strength for his position,” one NBA executive told HoopsHype. “He has a nice stroke and is a good but not great shooter. He has average NBA quickness and length for his position, but can get to the rim. Has the tools to be a good defender. He’s definitely good enough to play in the league, but at this point in his career, it depends more on what he’s looking for from a role and playing time standpoint.”

The Serbian guard last played in the NBA during the 2013-14 season with the Warriors where he saw limited action in 24 games.

Share of the vote: 13.33 percent of the maximum amount possible

Sengun, 18, is an international player to keep an eye on in this year’s draft class. According to the HoopsHype aggregate mock draft, the 6-foot-10 big man is currently a projected first-round pick.

“He seems to have great hands and a feel for spacing,” one NBA executive told HoopsHype. “He has just a really high feel for where to be at the right times, and then really good skill around the basket.”

This season, Sengun has averaged 19.3 points on an efficient 63.5 percent shooting from the field and 78.7 percent from the foul line. Defensively, Sengun is averaging 9.1 rebounds, 1.6 blocks, and 1.4 steals per game for Besiktas.

Share of the vote: 10.67 percent of the maximum amount possible

NBA fans will remember the Russian guard during his time with the Timberwolves, 76ers, Rockets, and Knicks during his three seasons.

Share of the vote: 10.67 percent of the maximum amount possible

James, 30, returned to the United States a couple of weeks ago with the hope of returning to the NBA, his agency BDA Sports tweeted.

With CSKA Moscow, James averaged 17.7 points on 45.2 percent shooting from the field and 36.9 percent from downtown with 5.1 assists per game.

He previously spent time in the NBA during the 2017-18 season where he put himself on the map with the Suns and Pelicans averaging 9.3 points and 3.5 assists in 19.1 minutes per game. 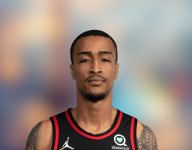 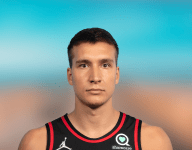 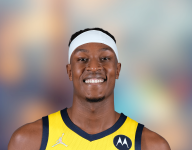