The 2020 NBA Draft was pushed back until October 16, which gives front offices and analysts far more time to evaluate this class of prospects.

When looking at the most recent mock drafts, the top three players (Anthony Edwards, LaMelo Ball, James Wiseman) have remained consistent since December 2019. However, other players once considered Top 10 picks (Cole Anthony, RJ Hampton and Tyrese Maxey) no longer have such billing.

We have provided brief scouting reports for the players who are currently considered as the favorites to be selected with the first fourteen picks in the 2020 NBA Draft. We also included a range for the remaining players who were outside of the lottery. 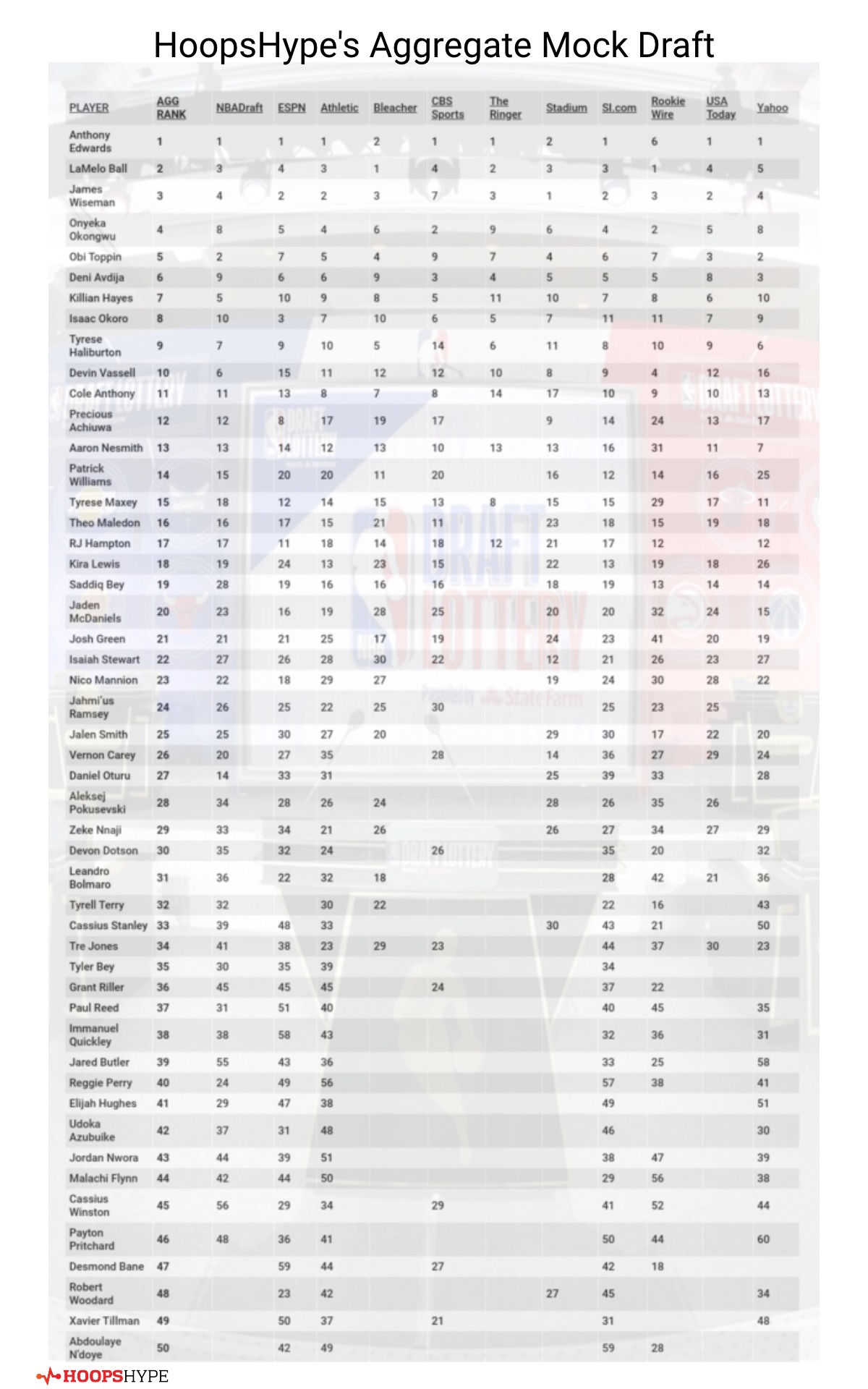 This draft may not have an obvious Zion Williamson as the “can’t miss” choice at No. 1 overall. But dating back to at least July of last year, Georgia’s Anthony Edwards has managed to lead the pack. Even if his campaign did not match expectations, he fits a similar mold of NBA stars like Victor Oladipo and Donovan Mitchell. He gets to the basket to finish with ease and with a more polished jumper, Edwards also brags the coveted 3-and-D potential.

LaMelo Ball is the prospect in this class who has the most fanfare and hype surrounding him. Around this time last year, Ball debuted on our aggregate mock draft exercise near the end of the lottery. Since then, however, he has leapfrogged his way as a consensus projection with one of the first few picks in the draft. Given his size and playmaking, there is enough to like about him to convince any general manager that he will be worth serious consideration.

While he did not get to have the college career that many hopes after he was the top recruit coming out of high school, there are still scouts and executives around the league that have James Wiseman in the No. 1 overall spot. Even though his style of play is not exactly the way the game has been trending in recent years, his massive frame alone will make him one of the most alluring options for teams that need a big man.

Even though Wiseman may have had more hype heading into the season, USC’s Onyeka Okongwu arguably proved himself as not only the best freshman but likely also the best big in college basketball. While he is a bit undersized to be a massive presence, he was a phenomenal rim protector and interior finisher. The productivity he showed on the court makes him easy to project as a rotational piece on a playoff team.

The best player during the shortened college basketball season was Dayton’s Obi Toppin. He was the nation’s most prolific dunker and is someone who would pair well with any pick-and-roll ball handler. Even though his defense needs work, his show-stopping offensive flashes make Toppin one of the more exciting options in this class. He is older than his fellow lottery projections but already seems ready to contribute as a scorer.

Even though he is one of the most coveted international prospects in this class, Israel’s Deni Avdija is also one of the toughest players to project thus far as he’s not getting extended playing time with Maccabi Tel Aviv. He has been one of the more impressive players when he did play. The forward brags some above-average playmaking skills for his size, which makes him a more dynamic option than others at his position. He needs to shoot the ball more consistently but can be an interesting developmental piece.

Among all the international prospects, Killian Hayes projects as the player who has the most upside. Hayes is a very talented combo guard who can be productive with or without the ball in his hands. He has proven himself as a strong finisher both in transition when he is put in the open court or one-on-one as a scorer on his isolation possessions.

Auburn freshman Isaac Okoro is an intriguing prospect because of his ability to score near the basket. Though he is just 6-foot-6, he connected on nearly 70 percent of these looks during his sole collegiate campaign. But the biggest concern for Okoro thus far has been his ability to finish beyond five feet of the rim. If he is able to find more opportunities from his jumper, he is someone who can end up as one of the best players in this class. Until then, it will be hard for him to justify a role in the first unit.

Iowa State sophomore Tyrese Haliburton is one of the most NBA-ready prospects. What he lacks in potential star-power, he compensates for with polished professional skills like court vision and shooting. Unlike other point guards, he does not need to ball in his hands to make a difference. He has one of the best assist-to-turnover ratios at his position and also has one of the longest wingspans among point guards in this class. With his length and shooting, he will find his way into an NBA rotation sooner rather than later.

Florida State was simply a far better basketball team when Devin Vassell was on the court. He played a pivotal role in their defensive identity and also had a much higher offensive rating during the minutes that he played. He was one of the most improved players in college basketball year-over-year and he will earn consideration from nearly every team in the league due to his plug-and-play style. Even without one noticeably elite skill, Vassell is easily the type of player who can help nearly every franchise.

No one had a bigger fall than UNC’s Cole Anthony when looking at the first aggregate mock draft projections (No. 2 overall) last year until now. Anthony struggled to help the Tar Heels win keys games, though his supporting cast was far weaker than most teams North Carolina has had in the past. But it is also worth mentioning that the guard was plagued with injuries for much of the year. His poor shot selection was exposed as he took too many mid-range shots. So, too, was his inability to score from within five feet of the basket. However, with last year now in the rearview mirror, he can turn a new page and find his way back to the prospect some projected to be the top pick in the draft.

Considering they did not have Wiseman, the Memphis Tigers did not look like the team that many expected before the season. However, the player who benefited the most from this was arguably Precious Achiuwa. He ended up as the main option in their offense and also played up one position in their frontcourt. Originally expected to play power forward next to Wiseman, the 6-foot-9 prospect showed he can be a viable option as a small-ball five in the NBA.

It will be hard to find someone who shot the ball better than Vanderbilt’s Aaron Nesmith did last season. The wing made more than half of his three-point attempts, shooting well on dribble handoffs as well as spot-up opportunities and when coming off screens. That alone will give him consideration from teams in the lottery. But with a smaller sample size due to injury as well as game film lacking much else beyond shooting beyond the arc, it is harder to find a fair range for Nesmith.

Florida State freshman Patrick Williams has been climbing in the aggregate mock draft rankings. He ranked No. 35 overall as recently as January and jumped up to No. 20 overall back in April. Now, the 18-year-old projects as a lottery pick when surveying consensus. Williams, who won ACC’s Sixth Man of the Year, is a versatile scorer who has been an effective shooter both off the catch and the dribble. But standing at 6-foot-8, the most exciting part of his game is that he has also been efficient as the ball handler in pick-and-roll sets. With an NBA system behind him, Williams is someone teams view as the player with the most upside.