Gonzaga Bulldogs star big man Chet Holmgren is a polarizing NBA draft prospect, but there are plenty of reasons to believe he will succeed.

Holmgren, 19, is a 7-footer who offers a unique skill set for someone his size. Not only can he block shots, but he can shoot three-pointers as well. He also can handle the ball and take it up the floor, which is especially exciting for a prospect his height.

As he continues to impress during action in March Madness, scouts around the league who have spoken to HoopsHype are continuing to fall more and more in love with the Gonzaga standout.

One scout who spoke to HoopsHype on the condition of anonymity because they were not authorized to speak publicly on behalf of their team said they have moved Holmgren to their No. 1 overall spot on their big board after the opening weekend of the tournament.

The scout remarked that in addition to his size and length and other on-court skills the big man has showcased, Holmgren also had a fantastic “disposition and demeanor” on display.

Learn why @ZagMBB star Chet Holmgren is the first player @BryanKalbrosky has getting picked in his latest mock draft: pic.twitter.com/ycjOm0v6HE

Holmgren, who ranked No. 2 overall on our latest aggregate mock draft, is playing well under the bright lights and big stage of the NCAA tournament.

Although no prospect is a sure thing to succeed in the NBA, and there are valid concerns about how his game might translate, it is a good time to start buying into his long-term potential.

As the tournament continues and Holmgren has helped Gonzaga punch a ticket into the Sweet Sixteen, here are a few facts you need to know about his game: 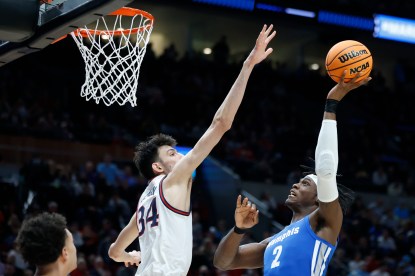 Gonzaga has the best defense in the nation on two-pointers, per KenPom. Of course, Holmgren’s remarkable rim protection plays a huge role.

His block percentage (12.1 percent) ranks as the best among “true high major” freshmen. Among all true major freshmen on record, Holmgren and Anthony Davis are the only players to log at least 65 percent of possible minutes for their team and also record a block percentage above 10 percent.

During his tournament win over Memphis, and projected big man lottery pick Jalen Duren, Holmgren put his length and his unwavering relentlessness as a defender on full display.

Length and toughness > strength. Chet Holmgren is giving up 55 pounds to Jalen Duren but it hasn't mattered so far. Holmgren is so tough to finish over with his reach, timing and motor. pic.twitter.com/K2356f729a

But it isn’t just his rim protection that makes him special and he is able to shut down his man no matter where the shot is coming from.

He has the ability to alter shots and when playing against Memphis, both Duren and DeAndre Williams paused on multiple shot attempts when they saw Holmgren was nearby.

When guarding the pick and roll, the screener is rarely able to get an open look at the basket and they have struggled to score with Holmgren as the near defender.

Opponents are shooting just 31.7 percent in the paint when Holmgren is on the floor. That outstanding figure ranks Holmgren in the 99th percentile, via CBB Analytics.

Holmgren plays an instrumental role in Gonzaga’s defensive identity and among all prospects in this draft class, he has a strong case for the most likely to earn All-Defense consideration in the NBA. 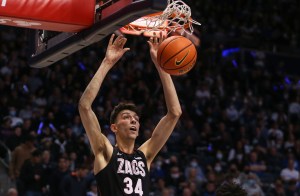 After getting a stop on defense, something scouts love about his game is that Holmgren is almost unstoppable when playing in an open floor offense.

He is averaging 1.36 points per possession as the ball handler in transition, per Synergy. That ranks second-best among the 327 players who have had as many opportunities. Holmgren can take it coast-to-coast with ease, using his long stride to make his opponents look foolish time and time again.

Chet Holmgren is an alien pic.twitter.com/0SVAwy8brK

Across the board, though, he genuinely knows how to pick his spots. Just take one look at his shot chart and you can see how much better than average he is no matter where he finishes.

Overall, the Gonzaga standout is averaging 1.17 points per possession. Among the 682 D-I college basketball players who have finished as many possessions, per Synergy, only three have been more efficient.

Among all freshmen on record to ever have as many attempts at the rim as Holmgren, only two have finished with a better field-goal percentage from that zone.

Considering his 7-foot frame, some may expect Holmgren to rely on posting up when facing smaller defenders in order to generate his offense. However, that is hardly how the big man is most impactful.

Instead, with or without using a screen, he tends to make a bigger splash when he is cutting to the basket. At the collegiate level, the way he scores at the rim is fairly unprecedented. Even if it doesn’t translate to the pros right away, expect him to continue his efficient scoring profile. 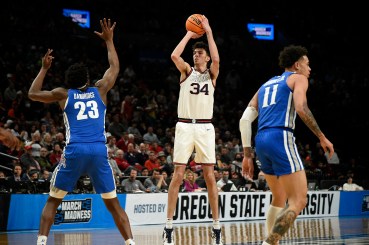 At this point in his development as a basketball player, the 19-year-old isn’t the type of shot-creator who is beating his man off the dribble. In fact, his jump shot hasn’t particularly impressed in a set offense.

However, despite some of his limitations as a shooter in the half-court, he is one of the most productive shooting prospects when the tempo picks up.

Holmgren is averaging 1.24 transition three-pointers per 40 minutes, via data derived from Hoop-Math and Bart Torvik. That is, far and away, the highest among all NCAA players who appeared on our latest consensus mock draft.

Not only have the majority of his long-distance shots come from the fast-paced offense but, according to Hoop Math, the big man is shooting an absurd 47.3 percent on three-pointers in transition.

He is constantly a threat to knock down the trailer three-pointer when in transition, which makes him an excellent floor spacer.

Another aspect of his offensive style that should intrigue scouts is that he actually has a fairly low usage rate. The offense does not have to revolve around Holmgren for him to make a difference and help the team win.

He has the second-best box plus-minus among all college basketball players on record to ever have a usage rate below 22.0 percent.

So even if he is going to start his career predominantly spotting up on the perimeter, he can easily find a way to fit into a professional offense even if it as a catch-and-shoot threat at first. NBA teams will not have to hand the keys to the offense to him as a rookie –  he can ease into the next level as he continues to progress.

Global Rating: The best players from each draft class

NBA draft: The best players ever at each position