Who are the top NBA players who can get a bucket or a defensive stop with the game on the line?

To find out, HoopsHype polled 21 NBA executives for their Top 5 clutch players in the game currently.

Some executives leaned towards the offensive side of the ball while others prioritized two-way ability.

Share of the vote: 50.48 percent of the maximum amount possible

Five of the 21 executives voted for Durant as their top clutch player.

“Kevin Durant is the best scorer in the game,” one NBA executive told HoopsHype. “He can beat you in so many ways with how well he shoots with his size. It’s almost impossible to get a real contest on his shot.”

Durant ranks fourth in clutch usage percentage (42.1) and fifth in clutch scoring average (3.9). Durant’s sweet spots are 16 feet to inside the three-point arc, where he’s shooting 57.4 percent, according to Basketball-Reference.

“Durant carried the Nets in the Milwaukee series, and he was carrying them this year before he got hurt,” another NBA executive said. “Whenever they needed a bucket, he delivered.”

Share of the vote: 40 percent of the maximum amount possible

DeMar DeRozan tied Durant with five executives voting for him as the top clutch player in the NBA. DeRozan, who has played himself into the MVP discussion, hit back-to-back game-winning buzzer-beaters against the Pacers and Wizards earlier this season.

“DeRozan is a tough shot maker who can score from all over the floor,” an NBA executive told HoopsHype. “His ability to score, pass, or get to the foul line is so hard to defend. You can have your best perimeter defender draped all over him, and he can still find ways to beat you. You just have to tip your cap to those types of guys.”

DeRozan, a known mid-range assassin, is shooting 54.5 percent from the 10-16 foot range. In the fourth quarter, he’s shooting 55.4 percent overall, according to Basketball-Reference.

“Who would you rather have with their hands on the ball?” an NBA executive asked. “DeRozan is a great mid-range scorer. His usage rate is up this year (31.8). He’s shooting over 50 percent on mid-range shots.”

DeRozan ranks fourth in clutch scoring average (4.0) and has a 122.2 offensive rating in clutch situations.

Share of the vote: 32.38 percent of the maximum amount possible

With Golden State owning the league’s second-best record (43-18) and many wins via the blowout variety, this was a bit of a surprise, considering the Warriors haven’t played as many close games as other teams this season.

“Likely recency bias from All-Star, but he is similar to Devin Booker in that he breaks your back,” an NBA executive told HoopsHype. “Reputation puts these guys on the list more so than actuality sometimes.”

Curry, who three executives voted for as their top clutch player, generally draws double-teams to get the ball out of his hands in clutch situations or a defender picking him up at halfcourt because of his ability to shoot from the logo.

Share of the vote: 26.67 percent of the maximum amount possible

Damian Lillard famously sent Paul George and the Oklahoma City Thunder home with a 37-foot game-winning shot in Game 5 of the playoffs in 2019 and sent the Houston Rockets home with a buzzer-beater in Game 5 during the 2014 playoffs.

“Dame has made big shots consistently and in big moments ending two different playoff series,” an NBA executive said. “He’s a tough cover because of his versatility in the way he scores and deep range.”

This season, Lillard remained Portland’s go-to player with a 35.8 usage rating in clutch situations before suffering an abdominal injury.

“Dame has made a ton of big shots in his career,” another NBA executive said. “This year is a down year because of injury. He’s never afraid of the moment.”

Share of the vote: 25.71 percent of the maximum amount possible

LeBron James has made seven career game-winning buzzer-beaters, according to Basketball-Reference, but his most memorable clutch play was his Game 7 block on Andre Iguodala during the 2016 NBA Finals.

“I think LeBron James is one of the most clutch players in the NBA,” an NBA executive opined. “I think Kevin Durant is an elite offensive clutch player. LeBron is on both ends, and I think Kawhi Leonard is too.”

Share of the vote: 22.86 percent of the maximum amount possible

Luka has already made three game-winning buzzer-beaters in his young career and has shot the ball solidly in the fourth quarter this season from the field overall (.451) and three-point line (.380).

“Luka has made a couple of game-winners, but he can get any shot he wants on the floor and will make more over time,” an NBA executive told HoopsHype. “He wants the ball in his hands. I took into consideration his international career too.”

With the acquisition of Spencer Dinwiddie, Dallas hopes to alleviate the ball-handling duties for Doncic early in games to keep him fresh down the stretch.

“Luka is an excellent ball-handler for his size along with an elite step-back move allowing him to create his own shot anytime he wants,” the lone NBA executive who voted for Doncic as his top clutch player told HoopsHype. “He’s also excellent at shooting contested jumpers off the dribble.”

Share of the vote: 21.90 percent of the maximum amount possible

“Chris Paul is a killer,” an NBA executive told HoopsHype. “He gives his teammates and coaches such great belief. He hasn’t gotten to the Finals like LeBron James every year, but every team he goes to is a playoff team, and he makes them so much better. He’s an organization changer.”

The assertion that Paul is an organization changer was echoed by a Western Conference executive whose team has faced Paul several times over the years.

“Just look at Chris Paul’s teams in OKC, Houston and Phoenix,” another executive said. “The teams he’s on always have great clutch records. He has a way of controlling the game. If it’s close, his team is going to win.”

“He’s had a couple of tough moments at big times that I think people remember, but he’s also had big moments like Game 7 against the Spurs,” a third NBA executive said. “He’s always hitting big shots and making plays in big moments. His clutch data overall is really good, and Phoenix this year is wild. They’ve been amazing in the clutch.”

Share of the vote: 15.24 percent of the maximum amount possible

Two executives voted for Leonard as their top choice for the most clutch player due to his two-way ability.

“Kawhi Leonard has a very demonstrated history of carrying teams,” an NBA executive told HoopsHype. “He’s a two-time Finals MVP. What happens if you’re freaking clutch. Offensively, he’s carried two teams to championships. He hit that humongous shot against Philly three years ago. With San Antonio before his injury, anytime they needed a stop, he got one. When Kawhi doesn’t want to be screened, you can’t screen Kawhi. He’ll either get through the screen, around it or catch up to the play. That’s what his size, strength, and athleticism will get you.”

When Leonard was healthy last season, he shot 51.6 percent from the field in the fourth quarter and 53.3 percent when the score differential was less than five points, per Basketball-Reference.

Share of the vote: 9.52 percent of the maximum amount possible

Jokic’s ability to rebound and bring the ball up the court, passing ability out of double-teams, and shooting touch from anywhere on the court make him an impossible cover defensively.

Share of the vote: 8.57 percent of the maximum amount possible

Booker has been nearly automatic in clutch situations, shooting 61.1 percent from the field with a 135.5 offensive rating.

“They haven’t had too many close games, but Devin Booker has zero hesitancy in the big moment,” an NBA executive said. “Often, his clutch shots happen that blow open a game. Maybe the game clock isn’t below three seconds, but he has a knack of blowing a game open.”

Share of the vote: 8.57 percent of the maximum amount possible

Irving, who drained a clutch three-pointer to give Cleveland the lead in Game 7 of the 2016 NBA Finals, has been tasked with silencing the road crowd down the stretch for the Nets this season with a 36.6 usage rating.

“Jimmy is a killer,” one NBA executive told HoopsHype. “He’s ultra-confident. It doesn’t matter if he’s missed 15 shots in a row. He thinks he’s going to make the next one. He wants the ball in his hands and has no fear when the game is on the line.” 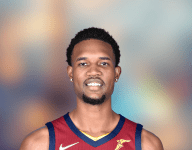