The Brooklyn Nets made a statement Thursday night with Ben Simmons on Steve Nash‘s bench in Philadelphia against the Sixers with a 129-100 blowout win.

Kevin Durant and Kyrie Irving faced their former teammate, James Harden, and shut him down throughout the game (11 points on 3-17 from the field). The boos directed at former 76er Simmons were loud and the atmosphere had a playoff game feel to it, but the visitors got the last laugh.

Here’s how NBA fans on Twitter reacted to the blowout Nets win, KD and Joel Embiid trash-talking each other, and Ben Simmons getting booed by the home crowd.

A touching tribute to Ben Simmons in his return to Philly. pic.twitter.com/bdwL7qxSlq

A Philadelphia fan who has been yelling toward Nets’ Ben Simmons has been removed from his seat to exit the arena.

KD admits the Nets were a little more locked in because they wanted to play well for Simmons because he couldn’t be out there himself. “We look at Ben as our brother … it’s hard for you to chant at Ben Simmons when you’re losing that much.”

Well, James Harden showed up just about as much as Ben Simmons did.

yeah, there is HATE between these two teams that’s even deeper than ben simmons.

society, as a whole, needs 7 games of this.

Ben Simmons with KD and Kyrie after the Nets smacked the Sixers pic.twitter.com/81U1jXM7vU

Kyrie Irving thought Ben Simmons handled the situation with fans well. Said the Nets have his back. "Ben's safe here."

Sixers getting booed in front of Ben Simmons pic.twitter.com/ocl48AY6l5

"It was very quiet towards the end. We ain't hear no more Ben Simmons chants from the Sixers fans."@KDTrey5 talked to @StephanieReady after the blowout win in Philly. pic.twitter.com/vshtKTi0KN

Careful, Joel Embiid. You make KD mad, you will pay.

Kevin Durant and Joel Embiid when they see each other after the Nets 76ers game pic.twitter.com/lO6TnO2w25

Kevin Durant and James Harden didn’t acknowledge each other in warmups. Ben Simmons and Joel Embiid didn’t either.

Give me seven games, please. 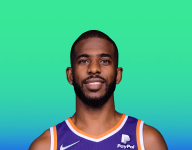