After eight years in Portland, CJ McCollum has been traded to the New Orleans Pelicans, per multiple reports.

NBA Twitter has been quick to play up the Damian Lillard angle after the biggest deal of trade deadline week so far:

trading CJ McCollum in 2019 to galvanize your commitment to Damian Lillard and win conference title is cool and all, but what if instead you got rid of him for an above replacement wing player and a bunch of draft picks that won’t do anything to keep Lillard in Portland?

Wanna throw back out there how lucky Portland was to have CJ McCollum. Never complained, never asked to be traded, just showed up and balled every night… and was pretty damn good at it. Hope he balls out in NOLA. #RipCity

In terms of players who can score at a high level, CJ McCollum is at the top of the list. Adding him to our already emerging core gives us the ability to both win games now and cultivate a sustainable future, where success is not something our hope, but our expectation.

With CJ McCollum gone, is Damian Lillard next?

LeBron to Damian Lillard outside the Blazers facility pic.twitter.com/ngcPfV1FWp

Damian Lillard in the Blazers locker room after he gets back from surgery: pic.twitter.com/gteOlQ63rx

This much is clear in Portland: Teams will be emboldened to pursue Damian Lillard in the offseason once the Blazers complete their expected trade of CJ McCollum to New Orleans. Can't speak to Lillard's intentions but he'll be chased even harder now.

Somebody grab the phone from the GM. pic.twitter.com/htxB1kycqr

Damian Lillard in September:
"I want to see our roster improve… I have faith that will happen."

Since then, Portland has traded
CJ McCollum,
Norm Powell and
Robert Covington

Damian Lillard and The Grind next season pic.twitter.com/lJzMD0sExf

I'd rather trade for Damian Lillard than James Harden 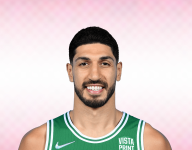