NBA Twitter reacts to Kevin Durant's performance in Game 2: 'I don't know who this man on my TV is but it’s not KD'

NBA Twitter reacts to Kevin Durant's performance in Game 2: 'I don't know who this man on my TV is but it’s not KD'

The Brooklyn Nets blew a 17-point lead against the Boston Celtics in Game 2 of the first round of the playoffs (114-107), with Kevin Durant arguably having one of his worst playoff performances.

NBA Twitter didn’t hold back on Durant and Irving during and after the game.

It's the first time in 55 games as teammates (regular & postseason) that both shot worse than 33% FG.

Never could’ve imagined that Kevin Durant playing poorly could be the reason the Nets get bounced in the first round.

Thought his production was a given. Credit the Celtics, but KD has been so underwhelming.

KD is in the The Boston Celtics Correctional Facility… I mean he’s under the jailhouse! God Bless America.

Payton Pritchard:
4 made FG’s on 5 attempts

KD and Kyrie COMBINED:
1 made FG on 9 attempts

KD is in a playoff slump

He had zero FGs in the second half of a playoff game for the first time in his career. pic.twitter.com/TnbnTcqMma

First time in his 13-year career he's shot under 40% and committed 6+ TO in consecutive games (Reg. Season or Playoffs).

Points in the 4Q

Payton Pritchard now finishing over Kevin Durant at the rim this has evolved into an NBA Twitter fever dream.

He is -23, the lowest on the Nets. pic.twitter.com/UMsdHSwE8u

Kevin Durant is just getting BULLIED and he has FOLDED. No mas. Make that The Softest Player on the Planet. So disappointing.

First time in KD's career he's taken at least 10 field goal attempts in the second half and made zero of them. https://t.co/JGZlBMbhXd pic.twitter.com/T2c0bBubND 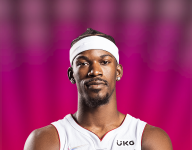