The Portland Trail Blazers as a team and organization have had a very rough 2021-22 season already. They are currently sitting at 11-14, which would qualify them for the final play-in slot in the West. Offensively, they’re still an elite squad, but they clearly need to make changes to the roster to improve their defense if they’re going to finish above the play-in.

Six months ago, HoopsHype weighed whether the Blazers were better off continuing trying to compete with their core versus blowing it up and rebuilding. Improving their defense, particularly on the bench, was a major priority after finishing last season 29th in defensive rating. Their biggest addition was trading for Larry Nance Jr., as well as the addition by subtraction of Carmelo Anthony and Enes Freedom. Despite that, they currently rank dead last in defense, largely thanks to being -100 in their last six games in which Damian Lillard was either playing hurt or unavailable.

Organizationally, the Blazers are in upheaval as they’ve fired long-time general manager Neil Olshey after a month-long investigation concluding that he violated their code of conduct. The noise around Lillard’s future will likely persist amid everything going on with the Blazers this season thus far. While it is fair to question his future in Portland, it seems more likely that the Blazers will first shift pieces around him this season instead of moving him.

Any significant move would likely require trading CJ McCollum, both for providing value and salary matching. With Olshey gone, it’s possible the new front office considers trading McCollum in an effort to significantly improve their defense. Such a move may be needed not only to try to save their season, but also to keep Lillard bought-in for the long term.

Here are some potential targets Portland can pursue to improve their defense in exchange for McCollum.

Another move Portland made to hopefully improve their defensive issues was bringing in Chauncey Billups as head coach. As Kevin O’Connor of The Ringer explains, the Trail Blazers under Billups rank first in the league in pick-and-roll defense with his aggressive schemes, but also rank last in points allowed per pick-and-roll. This discrepancy leads O’Connor to conclude that the Blazers roster needs improvement and is a huge supporter of a swap involving McCollum and Ben Simmons.

He argues that they get enough offense from Norman Powell and Anfernee Simons to alleviate the loss of McCollum. Aside from the boost of going from a negative defender like McCollum to arguably the best perimeter defender in the league in Simmons, he would add much-needed versatility that could allow Nance Jr. to be more successful on defense. Going from McCollum to Simmons would allow Powell to play the 2 more, which would also allow him to succeed defensively.

According to Shams Charania, Lillard is interested in playing with Simmons and a package including McCollum, a first-round pick, and a young player such as Nassir Little or Anfernee Simons has been discussed. Such a deal would be close to a wash salary-wise, which is important considering both teams are a little over the luxury tax. While completely blowing it up now is at least worth a discussion, it’s probably more pragmatic to acquire an All-Star like Simmons first, especially at that price, and try to compete. If they need to blow things up later, Portland would then have two All-Stars they can trade for young players and picks to jumpstart a rebuild.

Philadelphia started the season 8-2, but have slid to 13-11 because of many Covid absences – particularly to Joel Embiid, Tobias Harris, and Matisse Thybulle. The Sixers offense has completely fallen off since and still haven’t regained it since their core returned. Their offense should progress to the mean naturally, but adding McCollum to their nucleus could propel them back to the Top 10. Their defensive foundation would still be the same so there’s no reason for their defense to fall, which has been top 3 over the past two weeks.

The main issue with a trade like this for Philadelphia is that they’d lose the asset in Simmons, effectively taking them out of the bidding for any All-Star that may become available in the future like Lillard. With the Sixers hovering around .500, this is the type of deal ownership decides to get involved and push for. If the front office and ownership are aligned that a star could become available later then they should continue to stand pat.

If the Blazers cannot acquire Simmons, Pascal Siakam would be another great addition to the team. A lot of the same arguments for acquiring Simmons such as the defensive versatility he brings and lineup configurations he allows can be applied to Siakam. It also helps that both players earn identical salaries, allowing the Blazers to put together a similar package for Siakam.

There’s no indication that Siakam can be had, but his availability could be worth monitoring depending on how the Raptors look closer to the trade deadline. At the same time, McCollum might not be the cleanest fit in Toronto. While he would certainly improve their offense, it’s hard to see him boosting their ceiling more than Siakam. A third team may be required to take McCollum and send the Raptors a package that suits them.

According to Shams Charania, the Pacers have decided to rebuild and Myles Turner would be the ideal target for Portland. There may be some further tinkering in the roster needed to optimize him but he would fit very well immediately. A third team would be necessary to acquire McCollum since he does not fit in Indiana’s plans.

Jarrett Allen would significantly improve Portland’s defense and a deal for McCollum could make some sense with Collin Sexton out for the year and set to enter restricted free agency. Cleveland has been one of the most surprising teams of the season and should qualify for the play-in if they can sustain their success. For that reason, they’ll probably want to keep their core players intact. However, thanks to the emergence of Evan Mobley, it could be worth gauging the market on Allen at some point.

Jerami Grant is another veteran who could bring much-needed defensive versatility to the Blazers. He may not be at the level of Simmons or Siakam, but his two-way ability would be a welcome addition. A third team will likely be required to take McCollum and Portland would probably need more value added to the framework coming their way. 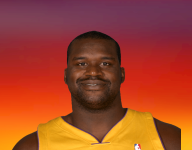