The Washington Wizards may not have been flashy with their offseason moves but you can make a case that they were certainly savvy.

Washington’s front office was able to move off the massive contract that was owed to point guard Russell Westbrook and acquired decent depth in return. Now, the Wizards have some solid pieces in Kentavious Caldwell-Pope as well as Kyle Kuzma and Montrezl Harrell.

Outside of trading Westbrook, their big move was landing guard Spencer Dinwiddie in a sign-and-trade with the Brooklyn Nets. Dinwiddie reportedly signed a three-year, $62 million deal with Washington.

Of course, the Wizards are fully built around Beal, who seems comfortable enough with the organization to not demand a trade. But they have managed to surround him with a young core highlighted by Rui Hachmiura and Deni Avdija, both young and promising wings selected in the lottery of back-to-back drafts.

This is what their depth chart may look like when the season begins, though there could be more moves with sharpshooting Davis Bertans potentially on the trading block.

During his last fully healthy season in 2019-20, Dinwiddie averaged 20.6 points and 6.8 assists per game. As a 6-foot-5 shot-creator, he will be a nice complementary piece to Bradley Beal in Washington’s backcourt so long as he is recovered from his injury. His projected backup, Raul Neto, re-signed with the Wizards and is a low-usage guard who shot well from beyond the arc this past season.

So long as he doesn’t ask for a trade, the Wizards can be competitive if they have Bradley Beal on their roster. He is coming off the second season in a row in which he led the Eastern Conference in scoring. Beal has also finished somewhere among the ten best scorers in his conference during each of his five most recent seasons. Washington also traded for Aaron Holiday, a role-playing combo guard who has had success as a playmaker and as a perimeter defender.

The wing rotation is a bit harder to predict for Washington because although Deni Avdija both started and finished the season running with the first unit as a rookie, he’s still not a knockdown shooter. If the Wizards are truly angling for a spot in the playoffs, which they should to help keep Beal, they should instead try for Kentavious Caldwell-Pope — who is a better 3-and-D option for a win-now squad. They can develop Avdija and their rookie wing Corey Kispert with minutes off the bench.

Since he was drafted by the Wizards in 2019, 6-foot-8 forward Rui Hachimura has started every game that he has played. While he is still an inefficient shooter, Hachimura is a force to be reckoned with in transition. Washington acquired 6-foot-10 forward Kyle Kuzma from the Lakers as part of the trade package for Russell Westbrook. That could mean the end of the road for Davis Bertans, who is potentially on the trading block despite being just two years into his five-year deal.

When he returns from his torn ACL, Thomas Bryant will likely start at center for the Wizards. The big man seemed primed for a breakout year after averaging 19.1 points and 10.4 rebounds per 36 minutes while also shooting better than 40 percent on three-pointers in 2019-20. Until then, Washington will roll out a combination of Daniel Gafford (acquired midseason from the Chicago Bulls) and Montrezl Harrell (included from the Lakers in the deal for Westbrook). Harrell has played best in his carer when in the second unit, so Gafford may get the nod when the season begins. 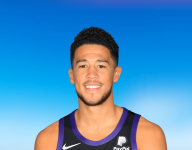