Especially while watching the teams that were good last season, it can be an overwhelming experience to track the year-over-year roster changes for teams that restructured. Of course, most fans are going to pay close attention to the teams that are favored to win the championship.

But as you decide what games to watch if you subscribe to NBA League Pass, you should seriously consider tuning in to these teams that may not have been on your radar last season.

Before the 2019-20 season, ESPN’s Zach Lowe ranked the Washington Wizards last overall on his annual NBA League Pass Rankings. This year, they jumped to No. 17 overall and that might still undersell how compelling this team could be in 2020-21.

Despite somehow not receiving All-Star team or All-NBA considerations, Wizards star Bradley Beal averaged 30.5 points per game last season. That mark led the Eastern Conference and was behind only James Harden for most in the league.

Washington moved on from former franchise cornerstone John Wall, who had not played an NBA game since December 2018, and replaced him with Russell Westbrook. By adding the nine-time All-Star, the Wizards now have two of the five leading scorers among all players since 2016-17.

Westbrook, who recorded a triple-double in his first game with Washington, has also recorded 456 more assists than any other player in the league since 2014-15.

Beal recently said that the “professional standpoint” that Westbrook brings to their work is something that the organization has not had in the nine years of his career thus far. Beal has also described Westbrook’s energy as contagious, which will help set the culture for the team as they aim for the playoffs.

As defenders account for Beal and Westbrook, forward Davis Bertans will have even more open looks on the perimeter. Last season, the 6-foot-10 sharpshooter hit a prolific 3.7 shots per game from three-point range while also shooting a remarkable 42.4 percent from beyond the arc.

Washington also has two young promising international players Deni Avdija and Rui Hachimura, selected as Top 10 picks in back-to-back drafts, who are both watching as they continue to develop.

Last season, CP3 was able to lead a young team that had just lost its two leading scorers from 2018-19 (Westbrook and Paul George) to the No. 5 seed in the Western Conference. Oklahoma City then took the Houston Rockets to seven games during the first round of the playoffs.

Paul, a consummate professional whose veteran presence has elevated the play of those around him, arguably has an even better supporting cast on the Suns. He can help shoulder the load on offense from Devin Booker, who is one of the best young scorers in the NBA.

Phoenix recorded an undefeated 8-0 record in the seeding games during the bubble. They also had the second-best offensive rating (120.3) among all 22 teams in the bubble as well.

While they already have one of the most feared backcourts, the Suns also have 2018 NBA draft No. 1 overall pick Deandre Ayton as a very promising young piece developing in their frontcourt.

Around the edges, their draft strategy has been to collect as many three-point marksmen as possible. Over three consecutive drafts, they have used lottery picks to add Mikal Bridges, Cameron Johnson and Jalen Smith.

Last season, the Atlanta Hawks had one of the worst offenses in the NBA. But make no mistake about it, this is easily the best team that emerging star guard Trae Young has ever had.

After improving his scoring average from 19.1 points and 8.1 assists per game as a rookie to 29.6 points and 9.3 assists per game during his second year in the league, realistically, Young can take another step forward with a strong support cast surrounding him.

Atlanta has managed to keep its young core intact while holding on to John Collins, De’Andre Hunter, Kevin Huerter and Cam Reddish – adding lottery pick Onyeka Okongwu to the mix as well.

But they have also added a solid group of veterans in Bogdan Bogdanovic, Danilo Gallinari, Clint Capela, Kris Dunn and Tony Snell to their rotation as the Hawks aim for an appearance in the postseason.

The results looked promising during their season debut as Young scored 37 points on just 12 attempts from the field, shooting 5-for-6 (83.3 percent) on his three-pointers. 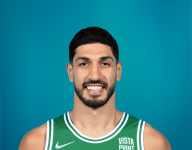