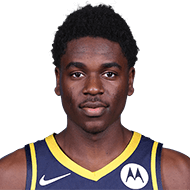 J. Michael Falgoust: Aaron Holiday has been in demand for 2 yrs now — Knicks, Suns, Grizz, etc were among those suitors — but despite that and McConnell being retained I’m told “he’s safe.” #Pacers remain high on Holiday
2 weeks ago – via Twitter ThisIsJMichael

Some with the Celtics have seen TJ Warren as an important piece of any Gordon Hayward sign-and-trade, but Indiana values Warren as a cornerstone, and is reluctant to move him, SNY has learned. Some with the Celtics also have seen Aaron Holiday as an important part of the package they get back from Boston in a Hayward sign-and-trade. But Indiana is also reluctant to move the young guard, per SNY sources.
2 weeks ago – via SportsNet New York

Ira Winderman: Pacers listing Justin Holiday as a starter in place of Aaron Holiday. No other changes.
3 months ago – via Twitter IraHeatBeat

“If you know T.J. Warren,” Pacers guard Aaron Holiday said, “you know he’s a bucket.” The explanation isn’t complicated, either. Warren works—constantly. Teammates say he only thinks about the game. His mentor, ex-Pacer David West, was equally committed. “I play a lot of basketball,” Warren said. “Whether I’m at home or with my friends, I just want to be a hooper.”
4 months ago – via Sports Illustrated

Since the Pacers returned to Indianapolis and then headed down to the bubble, teammates have been talking up Warren, how focused and prepared he seemed to be after the long layoff, but this … well, this was out of this world. This was Harden-esque. Or LeBron-esque. T.J. Warren? Really nice player, an amazing acquisition from the clueless Phoenix Suns, who gave him away for “cash considerations,” but you could have gotten a trillion-to-1 odds on Warren going for 50-plus on the very first regular-season game in the bubble. Or in any game. Anywhere. “We fed the dragon,” Oladipo said, smiling. “A guy that hot, you try to get him the ball, and I thought all our guys were trying to do that,” Pacers coach Nate McMillan said. “T.J. was as hot as I’ve ever seen him. And I thought his teammates did a good job of sacrificing, of screening and getting him the ball and giving him proper spacing. You’ve got to milk him. I thought our point guards (Aaron Holiday and T.J. McConnell), they combined for 18 assists, we had 44 assists in the game, so our ball movement was good, and a lot of that was ending up in T.J.’s hands.”
4 months ago – via Bob Kravitz @ The Athletic

J. Michael Falgoust: McMillan says the starting 5 he’s using in these scrimmages is what he’ll likely go into the seeding games using. Thats Turner, Warren, Oladipo, Brogdon, AHoliday. “I envision that lineup being the lineup we go with.” #Pacers
4 months ago – via Twitter ThisIsJMichael