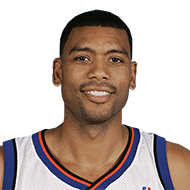 Detroit clinched postseason berths three times in that five-year run in teal and maroon, notably worn by Grant Hill, Jerry Stackhouse, Joe Dumars and Ben Wallace. “I think it’s great that people remember some things that we did in that era,” said Stackhouse, whom the Pistons acquired in a trade from the Philadelphia 76ers in 1997. “It wasn’t the glory days. It wasn’t the Bad Boys. It wasn’t the ’04 championship team, but in between that, you had Grant Hill, you had myself, you had Lindsey Hunter and Allan Houston. Terry Mills. You had guys that contributed to taking some ingredients from those Bad Boys.”
4 months ago – via Detroit News

share
tweet
send
sms
email
Jazz staffers and various figures around the league point most directly at CAA for the whispers that seem designed to push Mitchell toward requesting a trade from Utah, particularly to New York. Jazz personnel took great umbrage to Knicks executives William Wesley and Allan Houston and All-Star forward Julius Randle sitting courtside during Utah’s Game 1 road win over the Dallas Mavericks in the first round of the playoffs, sources said.
7 months ago – via Jake Fischer @ Bleacher Report

share
tweet
send
sms
email
After shooting 30% on 1.7 3-point attempts per game last season, Maxey leapt to 42.7% on over four attempts per game in 2021-22. Since the NBA introduced the 3-point line in the 1979-80 season, only two other players — Allan Houston and Todd Day — saw their percentages jump by at least 12% on such a dramatic increase in attempts, per ESPN Stats & Information research. The season it happened for Houston and Day was 1994-95, when the NBA moved its 3-point line back to 22 feet, meaning Maxey is the only player in NBA history with such an improvement from the standard 3-point line.
7 months ago – via Tim Bontemps @ ESPN

Tim MacMahon: There’s a strong Knicks contingent — including William Wesley and Allan Houston — in Dallas to scout Game 1 of the Jazz-Mavericks series.
8 months ago – via Twitter espn_macmahon

Oakley already sensed Dolan wasn’t fond of him. The former power forward had been publicly critical of the struggling Knicks, who had descended into misery under the owner. Oakley felt he never received the same ‘Once a Knick, Always a Knick’ treatment of some of his former teammates, including team employees John Starks and Allan Houston. “Me, Anthony Mason, and Patrick Ewing were always on the outside — they never offered us anything (job-wise) worth taking,” Oakley wrote. “I don’t know, maybe we didn’t kiss ass like some other guys did.”
10 months ago – via Stefan Bondy @ New York Daily News

Cunningham hasn’t been with the Pistons long, but he’s already given glimpses of why he was considered the consensus No. 1 pick in a talented draft. The 6-foot-6 guard averaged 20.1 points, 6.2 rebounds and 3.5 assists during his lone season at Oklahoma State. He was one of college basketball’s best shooters and clutch scorers as a freshman, and commands the ball like a point guard. He earned First-Team All-Summer League honors last week. “I don’t want to get anyone mad at me, but I haven’t been this excited for a Pistons draft pick since Grant Hill,” Rose said. “And to show you how much I’m a Pistons fan, he got picked before me. I was happy that they had him, and Allan Houston. I was like, ‘they have a squad.’ I would’ve did that, too. I’m not saying that he is Grant Hill, I’m saying he reminds me of Grant Hill.
1 year ago – via USA Today Sports