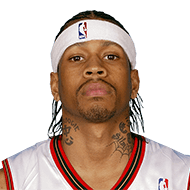 On Wednesday, the Warriors suffered their latest blow, a 130-119 loss to the Phoenix Suns that dropped them to 0-8 on the road to start a season for the first time since 1989-90, when they started 0-9. Their skid also is now the longest overall road losing streak by a defending champion since the 1998-99 Chicago Bulls, according to ESPN Stats & Information research. “Forget the road record, we can’t find a sustainable period of success where habits start to form and we’re in a position where we’re coming off the court feeling good about ourselves,” said Stephen Curry, who posted his 11th career 50-point game to tie Allen Iverson for ninth most all-time
2 weeks ago – via Kendra Andrews @ ESPN

share
tweet
send
sms
email
Gilgeous-Alexander is currently reaching thresholds of 31.0 points, 4.0 rebounds, 5.0 assists, and 2.0 steals per game. The only players to finish the season accomplishing all of those: Michael Jordan, Allen Iverson, and James Harden (when he won MVP). Add in thresholds of at least one block per game as well, which Gilgeous-Alexander is currently achieving, and you’ve got just two seasons in which M.J. won MVP. Before we get too hyped, though, let’s address the elephant in the room. Since the 1975-76 season, only three players in league history have won MVP in the same season in which their team did not win 50 games. The latest projections have Oklahoma City between 28 wins (via ESPN) and 30 wins (via FiveThirtyEight).
2 weeks ago – via Bryan Kalbrosky @ For The Win

share
tweet
send
sms
email
There have been few like it in Philly, even for a franchise littered with basketball Hall of Famers. Embiid scored the fifth-most points in franchise history. Wilt Chamberlain, naturally, holds the top three spots with 68 in 1967, 65 in 1966 and 62 in 1966. Allen Iverson scored 60 in 2005. “Those are two legends that played here that I respect a lot and to be in that company means a lot,” Embiid said. “I still got a long ways to go.”
3 weeks ago – via Associated Press @ New York Post

share
tweet
send
sms
email
At this point, however, there’s nothing but love between Iguodala and the Grizzlies — at least according to the Warriors vet (h/t NBA on ESPN on Twitter): “Yeah, they’re my guys, too,” Iguodala said. “… I’ve become a huge fan of all those guys. Jaren Jackson Jr. is one of my favorite players. … I talked to Ja. I played with Allen Iverson, so I’ve seen that talent, that cultural respect, the influence on the culture that he’s had. I reached out to him. He’s responded. He’s a good kid. He’s always shown me love, too. … Dillon Brooks even. I’ve talked about his irrational confidence, but that’s what makes him great. And then they got Bane, who shoots the lights out. I even had a conversation with him in a game.”
3 weeks ago – via Paolo Songco @ Clutch Points

Hyland looked like a man on a mission on Saturday, pouring in 24 points on 9-of-17 shooting, to go along with five rebounds, seven assists, two steals, and just one turnover in 25 minutes off the Denver bench. Bones also connected on six out of his eight attempts from deep in what was easily one of his best games as a pro. After the game, the 6-foot-3 guard was asked about how he looked up to Nuggets icon Allen Iverson. Hyland got all excited as he described just how much admiration he has for the Hall of Famer (via the NBA on Twitter): “Of course. Heck yeah,” Bones said. “That crossover, the flashiness, the swag, everything. You look up to a guy like AI. … I watched AI when I was younger, though, and just watching him on the Sixers was just like, ‘Wow.’ He’s a legend.”
4 weeks ago – via Clutch Points

share
tweet
send
sms
email
NBA: “That crossover, the flashiness, the swag, everything… you look up to a guy like AI” Bones Hyland talks about his admiration for @alleniverson .

"That crossover, the flashiness, the swag, everything… you look up to a guy like AI"

share
tweet
send
sms
email
Michael Singer: Bones called Allen Iverson a “buddy,” and said he’s gotten a chance to talk to him every now and then. Called him a legend and said of course he looked up to him.
4 weeks ago – via Twitter msinger