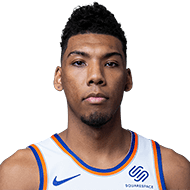 Shams Charania: Another notable name signing a G League deal: Former Knicks guard Allonzo Trier. He will be in Monday’s Draft. Trier, 24, averaged nearly 10 points per game in his two seasons in New York.
1 year ago – via Twitter ShamsCharania

This rumor is part of a storyline: 17 more rumors
share
tweet
send
sms
email
When Budden said that he’d hoped Durant would be in New York for the podcast, the Nets star replied that he was in California since “the Nets (are) out here working out, so I had to stay. A few of us, four or five of us, out here.” Durant, Irving and some other Nets – of both the Brooklyn and Long Island variety, like Spencer Dinwiddie, Devin Cannady and Jaylen Hands – have been working out in Los Angeles. Director of player development Adam Harrington, Durant’s longtime shooting coach, was with them, with Blake Griffin and Allonzo Trier joining in training and playing full-court.
2 years ago – via Brian Lewis @ New York Post

share
tweet
send
sms
email
KD said he’s been playing some with other NBA players, including Kyrie Irving, Blake Griffin and Allonzo Trier. “I’m playing a lot of one-on-one lately, so what comes with that is your handle is a little better, You’re more quicker with your moves. You’re less indecisive with what you want to bring out. So I’m just crafting that, that playground style of ball even more, just working out by myself or with two or three guys. “That’s the cool part about it because it’s hard to get that type of play in a regular season because you’re going through the team aspect, you’re training with the team and you want to preserve your body for the season. So if I’m playing 1-on-1 or 2-on-2s, it’s just going to help my creativity. That’s the timing thing that every injured player goes through. Just finding that rhythm again. Hopefully I gain it over time and once I get into real games it translates real fast.”
2 years ago – via Net Income @ NetsDaily