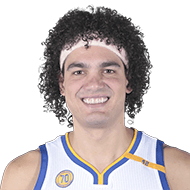 Chris Fedor: #Cavs Anderson Varejao’s 10-day contract technically expired. They were granted a hardship exception continuation & he has signed a second 10-day deal (which is actually just a 3-day that takes him thru end of the season), sources tell @clevelanddotcom. This was always the plan
2 years ago – via Twitter ChrisFedor

Marla Ridenour: #Cavs coach J.B. Bickerstaff said C/F Anderson Varejao and C Isaiah Hartenstein are available tonight at home against Portland. Hartenstein has missed the past 5 games with a concussion suffered April 25 at Washington
2 years ago – via Twitter MRidenourABJ

Rick Noland: JB Bickerstaff on seeing Varejao: “I thought he was going to take a charge.”
2 years ago – via Twitter RickNoland

share
tweet
send
sms
email
Marla Ridenour: #Cavs coach J.B. Bickerstaff said last thing he heard was Anderson Varejao is not dressing for tonight’s home game vs. Suns. Bickerstaff is aware that fans will be chanting Varejao’s name until he gets in a game.
2 years ago – via Twitter MRidenourABJ

Anderson Varejao had a couple conversations with general manager Koby Altman throughout the season. Varejao was in Cleveland, where he still lives. He never sold his house, not even during his brief stint with the Golden State Warriors or the year-plus when he was in Brazil for what seemed like the final stop in his accomplished basketball career. Then, about five days ago, Varejao received a phone call from Altman.
2 years ago – via Chris Fedor @ Cleveland Plain Dealer

share
tweet
send
sms
email
“He said, ‘Andy let’s do this. We’re gonna bring you back,’” Varejao recalled Tuesday morning, shortly after his signing became official. “It was a moment that I took to myself, like, ‘Wow, it’s really about to happen.’ It feels right. Cleveland is home for me. I love the city, I love the fans, I love the organization. I’m happy to be back. It’s not just the end of this season, it’s the 12 years that I’ve been here, that all counts to me. I was always ready to come back to be honest. I’m excited. It feels like I never left.”
2 years ago – via Chris Fedor @ Cleveland Plain Dealer