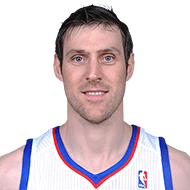 “This summer will be difficult for both European and NBA teams,” admitted Nocioni, “I believe that Facundo will have offers. For Madrid, it would be a huge loss but coupled with significant financial compensation that can allow the club to move forward.” “When I left Baskonia in 2004, most believed that the team would not recover but afterward made it to four straight Final Fours,” he added recalling his NBA move, “At Madrid, I retired and the following season the team won the EuroLeague again. Then Doncic left. The losses can be significant and hurt, but there is always a way to recover.”
2 years ago – via EuroHoops.net

Andres Nocioni on Facundo Campazzo: “I think that Real Madrid will have to listen to offers from NBA teams this summer. On behalf of his agent, Claudio Villanueva, or some club that wants him, I think that some team is going to try to turn the situation around and bring him to the NBA, that’s the reality. It also seems to me that Madrid is going to have to understand that it is going to be a move that he is going to try to make at some point. It is not easy for the players to make a great decision like Sergio Llull did, not everyone has that mentality of staying in Europe as Sergio has done. Facundo always saw the NBA as a possibility, since he was very young. He is not going to push it, but circumstances are going to make him consider the possibility.”
2 years ago – via Ricardo González @ AS.com

This rumor is part of a storyline: 44 more rumors
share
tweet
send
sms
email
The Sixers were coached by Doug Collins at the time and it seemed that Chapu could have a good time there again, because Collins told him he was going to be an important part of the team. But he got injured just before the 2010 World Championship. Collins called Chapu when he was in Turkey ready for the tournament and said: “Give up and don’t play. If you don’t, we can pull you out from the tournament because your health is in danger.” It was the beginning of the end. “I told him that I was not going to do it because I thought I could play. I also knew my body and, although it was not at one hundred percent, it could reach 80%. I also told him that playing at the World Championship would let me be ready to play the season in Philadelphia,” said Nocioni in his authorized biography. Obviously, Philadelphia pulled him out of the World Championship.
2 years ago – via Basquet Plus

share
tweet
send
sms
email
“Doug Collins lied to my face. Because he told me that I was going to be like Jesus Christ for the Sixers. And that’s why they took me out of the World Championship. The one coach who lied to me the most was Collins. He promised me something that later it wasn’t true. Andre Iguodala and Evan Turner played in Philadelphia, and I started playing when Iguodala was injured. But when he came back, everything changed. Andre did not want me in the team, because I hit him in practice, pushed him, irritated him. He was complaining about it, and instead of having my back, Collins pulled me out of the rotation. Then he lied to me again just before the playoffs. One day he comes and says ‘I’m going to rest Iguodala for a few games. I’ll give you those games so you are ready for the playoffs. Because this is a big thing, this is not for kids. Be ready’. I played well in the final two games of the regular season, averaging 15 points, and we started the playoffs against LeBron’s Miami, I had 10 minutes and never played again.”
2 years ago – via Basquet Plus 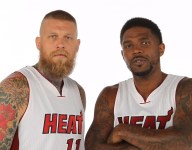 share
tweet
send
sms
email
In the World Cup Qualifiers game of Argentina against Paraguay, on February 26, Andres Nocioni will be present in the Carlos Guerrero Arena to see his national team “No. 13” jersey getting retired. Chapu, who retired last June as a Real Madrid player, played 121 official games with the national team, scoring 1364 points. Nocioni won Olympic Gold medal in 2004 and is third among the players with more games, behind Luis Scola and Leonardo Gutierrez.