share
tweet
send
sms
email
Jon Rothstein: KJ Williams tells me that he has officially withdrawn from the 2022 NBA Draft. Will play next season at LSU after transferring from Murray State. Averaged 18 PPG and 8.4 RPG last season.
5 months ago – via Twitter JonRothstein

Stephen Curry No. 49 in points now Moved ahead of John Stockton with 19,745 points. He’s now 297 away from Antawn Jamison
8 months ago – via HoopsHype 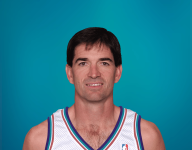 Jamison: I was in my office during The Decision. One of my closest friends was with me. You kept hearing rumors about how he was leaving. I just remember sitting down in my office thinking, “There’s no way this man is going to leave me here in Cleveland.”
2 years ago – via Jason Lloyd @ The Athletic

share
tweet
send
sms
email
Wilcox: We all remember LeBron coming back in early December. Everyone in the building knows how hard it was and how emotional it was. Jamison: Oh my God. There was so much hype into that game. You had a lot of young guys (saying), “King coming back, we’re going to show him.” We were just as hyped for the game as LeBron was. Hollins: If you could imagine talking to a scorned wife or husband after a divorce, that’s what it was. Leading up to the game, I was told by so many people to give him an extra elbow and hit him on the way down. It was so personal for everybody.
2 years ago – via Jason Lloyd @ The Athletic