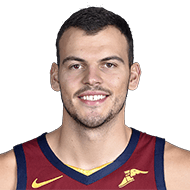 Reigning back-to-back EuroLeague champion Anadolu Efes will be signing free-agent center Ante Zizic according to Eurohoops sources. The two sides have reached an agreement on a two-year deal, with an opt-out close after the first season.
4 weeks ago – via EuroHoops.net

Keith Smith: As part of the process to complete the three-team trade with the Brooklyn Nets and Houston Rockets, the Cleveland Cavaliers renounced the free agent rights for Channing Frye and Ante Zizic.
1 year ago – via Twitter KeithSmithNBA

Maccabi Playtika Tel Aviv is proud to announce the signing of Ante Zizic (23, 2.08m) for the next two years. The Croatian center has many connections to the yellow-and-blue basketball club. First, he is the younger brother of Andrea Zizic, who won the Euroleague with the Yellows in 2014 after arriving during the season. In addition, in that same year he visited Israel together with Dragan Bender in the days when the Maccabi academy was established, when the latter signed with Maccabi, grew up in the club, rose to the seniors and was selected fourth in the NBA draft.
2 years ago – via Maccabi Tel Aviv

Ante Zizic will arrive in Israel on Wednesday as reported by Eli Sahar. Former Cavs will inks with Maccabi Tel Aviv.
2 years ago – via Sportando

Maccabi Tel Aviv and Ante Zizic have agreed to terms on a two year deal, reports journalist Moses Barda. Croatian center will join Maccabi after the end of his brief NBA spell with Cleveland, despite a strong interest by Real Madrid.
2 years ago – via Sportando