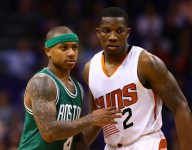 Former Cougar guard Anthony Johnson is considered the leading candidate for the job. Johnson, who interviewed for the position in 2012 before Wojcik was hired, has been contacted by athletic director Joe Hull and members of the search committee. In the next few days, the committee is expected to interview Johnson, who was the first player from the College of Charleston to be selected in the NBA draft when Sacramento picked the former Stall High star in the second round in 1997.
8 years ago – via Post and Courier

share
tweet
send
sms
email
I also talked Wednesday with former Kings draft choice Anthony Johnson, who played the past two seasons with the Orlando Magic. Johnson, the 39th pick of the 1997 draft out of the College of Charleston has played with eight teams. Johnson, who will turn 36 Oct. 2, was not re -signed by the Magic but still wants to play. “I’m working out, staying in shape and waiting to see what happens,” Johnson said. “I want to try and go out on my own terms. I know that doesn’t happen for everybody, but I still want to play before I shut it down. I’d like to go into coaching as an assistant if nothing comes up.”
12 years ago – via Marty McNeal

share
tweet
send
sms
email
In addition to Marvin and JC2, Bibby, Teague and Josh Powell also were at today’s run. So were free agent vets Stackhouse and Anthony Johnson.
12 years ago – via Atlanta Journal-Constitution