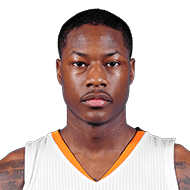 JD Shaw: Former NBA guard Archie Goodwin has signed in the TBT with Eberlein Drive. Goodwin, the No. 29 pick back in 2013, holds 165 games of experience with Phoenix, New Orleans and Brooklyn.
1 month ago – via Twitter JShawNBA

Emiliano Carchia: Former NBA guard Archie Goodwin has arrived in China where he will work out for some CBA teams, I am told. Goodwin has played 165 games in the NBA
3 years ago – via Twitter Carchia

Michael Scotto: Several NBA teams have expressed interest in Archie Goodwin who is seriously considering a lucrative offer in China, The Athletic has learned. Goodwin is expected to land in China unless an NBA team offers a fully guaranteed deal for next season.
3 years ago – via Twitter MikeAScotto

Portland thrived on a balanced attack and a deep roster stacked with current and former NBA-roster players, including rookies Anfernee Simons and Gary Trent Jr. and veterans Zach Collins, Caleb Swanigan, Wade Baldwin IV, Archie Goodwin, K.J. McDaniels and John Jenkins. “Every one of the guys on our team and something to prove,” Blazers coach Terry Stotts told The Crossover. “We had two rookies, we had Zach and Caleb who were rookies last year and needed to be in Summer League. Wade Baldwin and Jake Layman really hadn’t done much on the NBA stage. K.J. McDaniels and Archie Goodwin have bounced around. We had some experienced players but there wasn’t one guy who didn’t need to be in Summer League and show what they could do.”
3 years ago – via Sports Illustrated