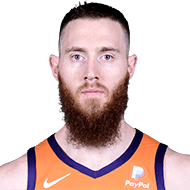 Baynes and the Toronto Raptors agreed to a two-year, $14.3 million deal, per The Athletic. The deal includes a team option on the season year of the contract. Baynes gave serious consideration to joining the Golden State Warriors before agreeing to terms with the Raptors, a league source told HoopsHype.
1 week ago – via Michael Scotto @ HoopsHype

Shams Charania: Toronto picks up one of the top big men on the market in Aron Baynes. Second season is a team option, sources said. Marc Gasol heads to Los Angeles on an agreement with the Lakers, where his preference has been and where his brother Pau is an icon.
1 week ago – via Twitter ShamsCharania

Chris Grenham: On The Jump, Ramona Shelburne labels the Celtics as a possible landing spot for Aron Baynes. “Bobby (Marks), I don’t know if you’ve heard this, but Boston obviously needs some more depth at center right now, having done the Enes Kanter trade.”
2 weeks ago – via Twitter chrisgrenham 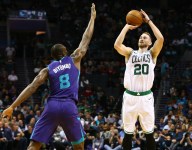 According to league sources, several playoff teams are hoping to lure him to their franchise. They see the value in having someone like Baynes to come in and just accept whatever role is thrown at him. The Suns also have plenty of interest in bringing him back, according to league sources. Whether that’s a starting position or as a key backup, Baynes could command the mid-level exception or not far from it. The taxpayer MLE should be somewhere in that $6 million to $6.5 million range.
2 weeks ago – via Zach Harper @ The Athletic