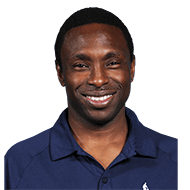 share
tweet
send
sms
email
The former Nets coach [Avery Johnson], in fact, thinks if the Knicks stand pat at No. 9 in Tuesday’s lottery, his point guard Collin Sexton won’t even be around for Knicks president Steve Mills and general manager Scott Perry to bring aboard. “I think he has unbelievable potential,’’ Johnson said in a phone interview. “I played in the league, coached in the league. He’s as fast as anyone I’ve ever seen in my NBA career. I think he’s a little bit closer to Kevin Johnson speed. I know that’s a blast from the past but that type of speed with [Russell] Westbrook athleticism.’’
3 years ago – via New York Post

share
tweet
send
sms
email
The second job Egan helped Prunty led to a 20-year career in the NBA. It includes stints as an assistant coach/video coordinator on three Spurs championship teams; an assistant on Dallas’ 2006 Western Conference championship team; a role in coaching Dirk Nowitzki and Tim Duncan in their MVP seasons; coaching Duncan, Kyrie Irving and Malcolm Brogdon in their rookie of the year seasons; and being on the bench during coach of the year seasons for Popovich and Avery Johnson. “I’ve been very fortunate to work with a group of people like that,” said the 49-year-old Prunty, who has also had a hand in Bucks All-Star Giannis Antetokounmpo’s development.
3 years ago – via USA Today Sports

share
tweet
send
sms
email
It wasn’t the best move financially, but Avery Johnson advised Stackhouse to go G-League and leave Dwane Casey’s Toronto staff. “He talked about what he needed — stay on the bench in the NBA or make that G-League jump,’’ Johnson said. “Mission accomplished. I told him he needed to get head-coaching experience, the way the G-League is developing. It was the perfect spot, and he embraced it. It wasn’t about the money but the experience.‘’
3 years ago – via New York Post

share
tweet
send
sms
email
The Chicago Tribune reported in March 2000 that Spurs guard Avery Johnson was angering teammates with selfish complaining after being benched in several fourth quarters for Terry Porter, who was a better 3-point shooter. During a 92-81 Spurs loss at Cleveland on Feb. 15, 2000, Johnson and teammate Malik Rose argued over a defensive play when Cavaliers guard Andre Miller got a 3-point play. After the game, a nude Johnson tried to slap Rose in front of his locker while on his way to the shower, a source told The Undefeated. Rose lunged forward to hit Johnson and slipped and fell after stepping into teammate Mario Elie’s bucket of ice. Rose was held back by teammates Felton Spencer and Jerome Kersey. Still nude, Johnson started pacing around the locker room, throwing stuff around and breaking a television while having words for Popovich, Robinson, Rose and Porter about the team no longer being his. The Spurs didn’t re-sign Johnson, although the franchise did retire his No. 6 jersey after he retired, and he instead signed with the Denver Nuggets.
3 years ago – via The Undefeated

Monty clung to the fact that the children all survived, and without life-threatening injuries. For a while it seemed Ingrid might too, but the following afternoon she slipped away, at the age of 44. Friends and family descended. Ingrid’s parents drove through the night from their home in San Antonio. Clippers coach Doc Rivers, who’d played with and later coached Monty, canceled his vacation to fly in. Monty’s pastors from Portland and New Orleans arrived. Gregg Popovich, his longtime mentor, reached out immediately. Charlie Ward, Billy Donovan, Sam Presti, Avery Johnson, Tim Duncan: They visited, called, texted. Anthony Davis and Ryan Anderson, players he was close to on the Pelicans, in town to play the Thunder, came to the house to sit with him. So many people sent flowers that Ayana Lawson, the Thunder’s director of player services and appearances, finally contacted local florists and requested they send the gifts to one of Ingrid’s charitable causes. Even so, Shaquille O’Neal managed to have a white orchid the size of a small tree delivered.
4 years ago – via Sports Illustrated