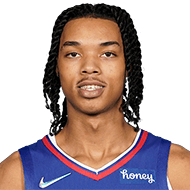 Boston, 20, became the youngest player on the team after the Clippers sent 2021 first-round shooting guard Keon Johnson to the Portland Trail Blazers as part of the trade that brought Covington and Norman Powell to LA in February. Boston already showed potential with an 18-point second quarter in December against the Boston Celtics. That game followed an outing with the Agua Caliente Clippers where Boston scored 46 points in the G League, which had some Celtics referring to Boston as “Mr. 46.” “Brandon Boston, 51st pick in the draft, and to be able to have some of the bright lights, big moments he had, the game he had against Boston stands out,” Frank said. “But like the G League game he had … what did he have, 49, 47? But like to see how he’s ascending — and he’s 20 years old.”
5 months ago – via Law Murray @ The Athletic

LA Clippers: BJ Boston (G League – on assignment) has been upgraded to available.
7 months ago – via NBA.com

Law Murray: In addition to Mann, Justise Winslow is still not with the team, per Lue. That means that you all will get what you want: some rotation minutes for Brandon Boston Jr., Amir Coffey, Jay Scrubb.
11 months ago – via Twitter LawMurrayTheNU