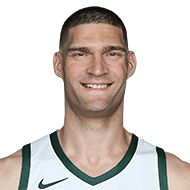 Milwaukee Bucks center Brook Lopez is partnering with Milwaukee-based Next Door to donate books through his “Blocks for Books” program. During the 2020-21 season, Lopez will donate $200 to Next Door for every block he tallies, with a minimum commitment of $25,000. The donation will go toward the purchase of books for kids in the Milwaukee community.
4 weeks ago – via NBA.com

share
tweet
send
sms
email
Milwaukee is an hour’s drive from Kenosha, where prosecutors deemed the actions of local police in the Blake incident an appropriate use of force. “It’s in our backyard,” said Bucks coach Mike Budenholzer. Milwaukee players, who launched the brief wildcat strike in the bubble after the Blake shooting, decided something needed to be done. They could kneel for the anthem, though networks might not show it. According to Brook Lopez, Pat Connaughton suggested something more visible: kneeling after tip-off for seven seconds—one for every bullet Blake was shot with. “As a team, we’re going to use our platform the right way,” said Giannis Antetokounmpo. “My kid is going to grow up here in America, and my kid is Black. I cannot imagine my kid going through what I see on TV. While I’m living and while I’m breathing, if I can do something about it to even change it 2%, 5%, for the better, I’m going to do it.”
2 months ago – via Chris Mannix @ Sports Illustrated

Kane Pitman: Bud on Brook Lopez’ offensive role: “He’s capable of making shots from everywhere. We played through him in the post a little more last year, it’s been such a short preseason….we want to be more versatile and dynamic and Brook can be a part of that”
2 months ago – via Twitter KanePitman

share
tweet
send
sms
email
Eric Nehm: Horst said he believes being able to add Jrue Holiday without giving up Giannis Antetokounmpo, Khris Middleton, Brook Lopez and Donte Divincenzo was “a coup for us.”
2 months ago – via Twitter eric_nehm

Milwaukee also pursued players such as Indiana Pacers two-time All-Star Victor Oladipo and Brooklyn Nets guard Spencer Dinwiddie during the offseason, sources said. Around Giannis Antetokounmpo, the Bucks have built a supporting cast of Holiday, All-Star Khris Middleton and All-NBA defensive center Brook Lopez. Either way, given their history battling for MVPs, Harden and Antetokounmpo would be a dreamy duo.
3 months ago – via Shams Charania @ The Athletic