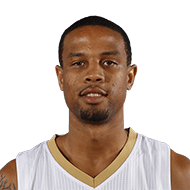 “I really liked his game,” Gentry says. “He was very tough, very athletic. He could guard different positions, and he was extremely hungry. When someone has that level of talent, but he doesn’t see failing in the NBA as an option, you have something unique.” Dejean-Jones averaged 5.6 points and 3.4 rebounds before his season ended with a fractured right wrist. Yet he was, at long last, an NBA player. “I think he really grew with us,” Gentry says. “The difficult phase had passed, and he attained his goal. I think he realized he needed to change his ways to stay in the league. He was smart enough to do that.”
5 years ago – via Bleacher Report

Storyline: Bryce Dejean-Jones Death
share
tweet
send
sms
email
People familiar with Bryce and Chrystal’s difficult relationship insist they discouraged the trip. Shabazz Muhammad, the Minnesota Timberwolves forward who trained under Jamerson with Dejean-Jones in the offseason, says he urged his friend to skip Dallas and take a trek with him to Las Vegas. “He worked so hard, I wanted him to come along, have fun, relax,” Muhammad recalls. “But he wasn’t changing his plans.” Jamerson, meanwhile, hated the idea of Dejean-Jones going to Dallas. “He’d never been there; he didn’t know the city,” Jamerson says. “I was worried, and I told him I’d fly his girlfriend and daughter out to California for him. He didn’t want that, but I should have insisted. I really should have. It’s my greatest regret.”
5 years ago – via Bleacher Report

share
tweet
send
sms
email
No charges were filed against the teacher. Under Texas law, a person is allowed to use deadly force to defend themselves in their home. It also says a person using force cannot provoke an attacker or be involved in criminal activity at the time. The teacher agreed to talk about the shooting publicly for the first time to B/R Mag because, he says, too much misinformation has been making the rounds on social media. There were rumors that Dejean-Jones was robbing the apartment; rumors that the teacher fired for no reason. “I believe the family deserves to at least know what really happened,” he says. “They deserve an opportunity to hear the story.”
5 years ago – via Bleacher Report

share
tweet
send
sms
email
The New Orleans Pelicans honored the memory of Bryce Dejean-Jones in summer league by having their players wear a ‘BDJ’ patch on the left side of their uniforms. On Friday, Dejean-Jones’ mother, Franchesca, came to the Las Vegas to watch the Pelicans play their final Samsung NBA Summer League game against the NBA Development League team at UNLV’s Thomas & Mack Center. Dejean-Jones died from a gunshot wound on May 28 while visiting his girlfriend in Dallas.
6 years ago – via New Orleans Times-Picayune

Storyline: Bryce Dejean-Jones Death
share
tweet
send
sms
email
The last time Jameel McKay talked to Bryce Dejean-Jones, the two former Iowa State teammates discussed their dream scenario of reuniting in the NBA as members of the New Orleans Pelicans. Six weeks later, McKay has joined the Pelicans and is part of their summer league team, but his friend is gone. Dejean-Jones died May 28 in Dallas, while visiting the city to celebrate his daughter’s first birthday. McKay and his New Orleans summer teammates are honoring the memory of Dejean-Jones, who was 23 years old, by wearing a “BDJ” patch on the left chest of their uniforms. The Pelicans play their first game tonight against the Los Angeles Lakers (9:30 Central) on ESPN. “I talked to Bryce two days before the incident,” McKay said of a late-May phone call. “I was hoping I’d play for the Pelicans in summer league (if McKay went undrafted), because I knew they were interested in me, so we were talking about being teammates again. “When I heard about what happened, it was just shocking. Everyone called me for confirmation, but I couldn’t give it. I didn’t know.”
6 years ago – via NBA.com

share
tweet
send
sms
email
“Every time I was around Bryce, I got the sense he knew where he wanted to be and he wasn’t going to let anything stop him from getting there,” said the 26-year-old Drew, trying to control his emotions. “He was fearless. He wasn’t afraid of the challenge and embraced it, and he got to achieve his goal of making it to the NBA.
6 years ago – via NBA.com

Justin Verrier: Pelicans GM Dell Demps had the following to say about Bryce Dejean-Jones, who died of a gunshot wound in late May: “We’re devastated by the fact that he’s no longer with us. We went through a lot of adversities and challenges last season, but nothing compares to the loss of Bryce. He loved our teammates and everyone, and he’ll be missed. Our condolences go out to his family.”
6 years ago – via ESPN.com