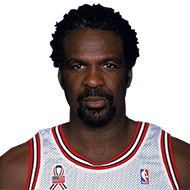 Position: -
Born: 12/18/63
Height: 6-9 / 2.06
Weight:244 lbs. / 111.1 kg.
Earnings: $43,907,000 ($80,499,359*)
0 share
share
tweet
pin
sms
send
email
Eddy Curry: I remember Oakley made me late for the plane. He’s my guy. After a home game, we’d be leaving and had a certain amount of time to get to the plane, but he had to go get his soul food. He’d always make me take him. I’d take him in his car. He could never get his food and leave. He knew the guy who owned it. He’d hang out like we had nowhere to be. They wouldn’t say anything to Oakley, but they’d say something to me for being late even though they know I’m with Oakley. He’d have me in his Range Rover on the highway. Every time we ran late, he had a switch that had police lights. He’d hit the lights and had me riding on the shoulder and barked out these orders while I was driving. I used to be so scared. I was like, “Oak, I’m going to get arrested.” He’s like, “F*ck that. You heard me. I got you. Don’t worry.” We’d barely make it to the plane.
8 months ago – via Michael Scotto @ HoopsHype

Oakley: The players these days know more about nutrition and do more core workouts with bands. We did more with weights. We ate everything. We ate fast food. For many years, we would have McDonald’s for breakfast and Burger King for lunch or dinner. In our era, we would just have to get things in our stomachs and live with that. Some people can play after eating a steak before the game. Some people say to eat pasta or chicken.But to each their own.
8 months ago – via Bryan Kalbrosky @ For The Win

The good news is Charles Oakley’s new memoir, “The Last Enforcer: Outrageous Stories From the Life and Times of One of the NBA’s Fiercest Competitors,” comes with a six-page index, for easy perusal. The bad news — particularly if you played in the NBA during the power forward’s 19-year career, from his 1985 debut alongside Michael Jordan on the Chicago Bulls, to his 2004 retirement from the Rockets — is if you find your name in the book.
9 months ago – via Christopher Borrelli @ Houston Chronicle

share
tweet
send
sms
email
After a light, laudatory forward by Jordan himself (“He truly was my enforcer”), Oakley begins, in the first sentence, with direct words for Charles Barkley. No, he never punched Charles Barkley, he explains: “I did, however, slap the (expletive) out of him.”
9 months ago – via Christopher Borrelli @ Houston Chronicle

share
tweet
send
sms
email
You could have titled this book “Barkley and Me.” Charles Oakley: Yeah, well. Q: How did that beef start? Charles Oakley: I guess when he tried to smack me on the cheek in a game. Ever since, it’s all-out warfare. I’ve been around him a couple of times since. Nah, he can’t get it. Him and Isaiah (Thomas). Now Isaiah is talking smack. He’s mad he wasn’t on the Dream Team. When he didn’t get on the Dream Team, it hurt his feelings. He’s sensitive. He’s mad Mike came and took his hometown, Chicago (where he spent high school). He’s a mad guy.
9 months ago – via Christopher Borrelli @ Houston Chronicle

share
tweet
send
sms
email
When asked the poll question, NBA legend and NBA TV analyst Isiah Thomas responded “Absolutely,” Giannis would perform at the same level. But, Thomas didn’t stop there. He went on the rail against former players trashing current players and even mentioned Oakley by name. “Giannis going around Oakley, Giannis going around all them. He dunkin’ on them. He bigger, he faster, he stronger. You can talk all that stuff ’cause you don’t play no more. You can talk all that stuff ’cause you got gray hair and you sitting on the sidelines, smoking cigars about what you used to do. That dude will dog you ever single time y’all step on the court.”
9 months ago – via Drake Bentley @ Milwaukee Journal-Sentinel

Storyline: GOAT Debate
share
tweet
send
sms
email
“He’d be dunkin’ on all them,” Thomas said of the players from his era, pleading with them to stop the hate: “All y’all stop it with ‘he wouldn’t dominate in the 80s.’ We ain’t never seen no dude like this come into our league. And give him his props, give him his credit. He would dog anybody in the 80s, 90s, 2000s and 3020 when we get there,” Thomas said.
9 months ago – via Drake Bentley @ Milwaukee Journal-Sentinel