The personality differences between father and son are striking, according to Charlie Ward. The elder Kevin Knox was a brash 6-foot-3 wide receiver at Florida State. Kevin Knox II is a 6-9 forward out of Kentucky — the strong, silent type who Ward believes has the mentality to become the Knicks’ next “superstar.”
4 years ago – via New York Post

share
tweet
send
sms
email
On draft night in June, a Florida State connection became a Knicks connection for Ward. The elder Knox was Ward’s favorite target in the 1990s. They won the national championship in 1993, but Knox never made it big in the NFL despite being drafted in the sixth round by Buffalo. He lasted one season, appearing in two games, with the Arizona Cardinals. Ward, the Knick point guard during the franchise’s heady days of the late-’90s, believes the son will make it much bigger than the dad as a pro. The younger Knox’s reserved nature, a la Tim Duncan, will work well in the New York basketball cauldron, according to Ward.
4 years ago – via New York Post

share
tweet
send
sms
email
Ward, the 1994 Heisman Trophy winner, regrets FSU failing to land the younger Knox more than a year ago but was overjoyed the Knicks selected him at No. 9. “I’m grateful he’s a Knick,’’ Ward told The Post in a phone interview from Tallahassee, Fla. “I think he has the right mentality to be successful in New York. He seems to have a mature approach and great understanding of where he is in his development. The kid is well-balanced, with an inner confidence and swagger to him while having a quiet demeanor — which you need, especially being in New York. That’s the kind of superstar you want — a guy who will go about his business, not going to be talking much, but learning the ropes on how to get better each day. New York is a tough place to play, but you have to have thick skin. He’s willing to listen and be coached. His whole mentality and attitude is one that will help him become a superstar in the league at some point.”
4 years ago – via New York Post

share
tweet
send
sms
email
“A lot of the slowing down of the game had been the result of stringent illegal defense rules,” says Carlisle, whose first season as a head coach, with the Detroit Pistons, coincided with the reforms. “The [defensive three-seconds rule] was a major step toward the game that we have today. Ball movement and creating offensive scrambles for open shots was becoming more of the norm than posting up a great player, having him back in, drawing a double-team.” In the ’90s, the post-up had been a central feature of many NBA offenses. Carlisle noted that one of the enduring images for him of the late ’90s, when he was an assistant coach with the Indiana Pacers, was watching Mark Jackson deliberately back down New York Knicks guard Charlie Ward, who would squat in a defensive stance that looked like something out of pro football.
4 years ago – via ESPN 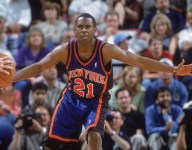 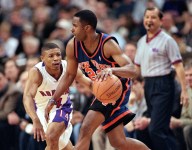