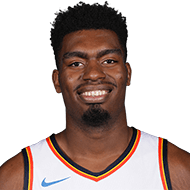 Zhang Duo: Wilson Chandler, Eric Moreland, Andrew Harrison and Dakari Johnson have not been registered for CBA regular season because their IgG antibody test result is positive, according to Jia Lei.
2 years ago – via Twitter ZhangDuo15

According to Chinese newspaper Jinan Times, former Oklahoma City Thunder big man Dakari Johnson has agreed to a deal with Chinese side Qingdao Eagles. The Thunder traded Johnson to the Orlando Magic during the offseason and then Orlando moved the big man to Memphis. After the trade to Memphis, Johnson was waived and became a free agent.
4 years ago – via Sportando

Josh Robbins: The Magic-Grizzlies trade, in which Orlando received Jarell Martin and cash for Dakari Johnson and the draft rights to Tyler Harvey, is now official.
4 years ago – via Twitter JoshuaBRobbins