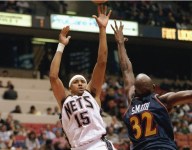 These are the most traded players in NBA history

Former Gonzaga University point guard Dan Dickau, whose long hair and curls were a trademark during his playing days, is now running his own barbershop. After six seasons in the NBA, Dickau, 34, hung up his shoes in 2011. Last fall, he and his wife moved to Spokane from Vancouver. The Barbers, which Dickau opened last week at 9331 N. Newport Highway, is his first try at operating a franchise. His one previous business venture, a for-profit basketball camp in Vancouver, lasted about a year.
9 years ago – via Columbian

share
tweet
send
sms
email
The Portland Trail Blazers have decided not to bring back player development assistant, Dan Dickau, for the 2012-13 season. However, CSNNW.com has learned that Dickau is a finalist to become the head coach of the NBDL’s Idaho Stampede, the Trail Blazers’ minor league affiliate in which they have full control over the team’s basketball operations. According to a source close to the situation, Dickau recently concluded his second interview for the head spot.
10 years ago – via CSNNW.com

share
tweet
send
sms
email
The Portland Trail Blazers have decided not to bring back player development assistant, Dan Dickau, for the 2012-13 season, CSNNW.com has learned.
10 years ago – via CSNNW.com