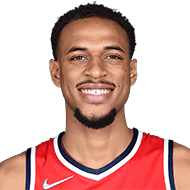 So Washington can utilize Porzingis in drop coverage against most opponents, allowing him to contest or alter shots in the paint. As a result, Washington is still seventh-best in the league in opponent paint points allowed per game (47.3). And the Wizards are also getting better at defending without fouling; entering play Tuesday, they were tied with the Grizzlies and Jazz for 10th in the league in lowest opponent free-throw rate (.258). In a league where teams hunt two things, and two things only, on offense — 3s and layups — Porzingis and Daniel Gafford are taking the latter away at a high level. And Monday, Porzingis got the defensive player of the game belt from Beal. “I was just trying, like every night, protect the rim, get a steal or two,” he said. “Thrill (Barton) had some good defensive plays. So, me and him, we both got the belt tonight.”
2 days ago – via David Aldridge @ The Athletic

Former Wizards (and Magic and Suns) center Marcin Gortat is here today working with center Daniel Gafford. Gortat is an example of player development at its best. He joined Orlando as a raw player but improved after working w/Brendan Malone & strength coach Joe Rogowski. pic.twitter.com/PYMZhNBIG7

Wes Unseld Jr. estimates he will fly a total of nearly 40,000 miles just this summer, so not including all the midseason road trips as head coach of the Washington Wizards. Unseld Jr. traveled to Latvia for the first time to see Kristaps Porzingis. He went to L.A. to see Daniel Gafford. Right now he’s in Cairo, Egypt, also for the first time, coaching young players from Africa for the Basketball Without Borders camp. And in about a month he will be in Tokyo, Japan as the Wizards play the defending-champion Warriors in two preseason games.
3 months ago – via Chase Hughes @ NBC Sports

Christos Tsaltas: Taj Gibson on Porzingis and Gafford: “Porzingis is a talent. Gafford is a young athlete talent. I want to be myself. Those two guys are extremely talented and sky is the limit”. #Wizards
4 months ago – via Twitter Tsaltas46

Taj Gibson had a $5 million option for next season that wasn’t picked up by the Knicks, although the team could’ve still re-signed him at a lower number. Gibson said returning to the Knicks was a “possibility” because “I understood the role.” However, he agreed to a one year, $3 million deal with Washington, where he’ll back up Kristaps Porzingis and Daniel Gafford. It’s an opportunity for a bigger role for Gibson.
5 months ago – via Stefan Bondy @ New York Daily News