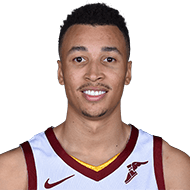 Rick Noland: Exum to miss 6-8 weeks with strained calf; Garland could be out a week with sore shoulder
7 months ago – via Twitter RickNoland

Dante Exum’s torrid injury run has continued, with the 25-year-old suffering a lower leg injury during Tuesday’s (AEDT) clash against the Orlando Magic. Exum limped from the court in the opening minute of the Cavaliers’ clash with the Magic after hurting his right leg. There were fears the Australian may have suffered an Achilles injury but Cavs’ media staff said the early prognosis was a calf issue.
7 months ago – via ESPN staff @ ESPN

Kelsey Russo: #Cavs Dante Exum suffered a right calf strain, and he will not return to the game.
7 months ago – via Twitter kelseyyrusso

share
tweet
send
sms
email
The Cavs have forced miscues on 20.0 percent of opponent possessions, far and away the top figure in the league. Handsy bigs Larry Nance and Andre Drummond have been constant pests — the two have nearly as many steals (28) as Utah’s entire team (32) — while Dante Exum has been an active nuisance after being pressed into service as an emergency starter at small forward. The amazing part is that they’ve pulled this off without committing an inordinate number of fouls or surrendering layups and 3s. The Cavs are fifth in opponent 2-point percentage and allowing a normal 3-point rate. If they keep up this unexpected U-turn on defense, a very surprising season could be in order.
7 months ago – via John Hollinger @ The Athletic

Chris Fedor: #Cavs starting Dante Exum today at small forward. Have heard from some within the organization about seeing Cedi Osman as a better fit off the bench, as a scoring & playmaking sixth man.
7 months ago – via Twitter ChrisFedor