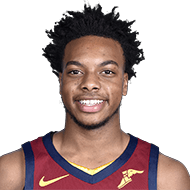 Position: G
Born: 06/26/00
Height: 6-1 / 1.85
Weight:175 lbs. / 79.4 kg.
Salary: $6,400,920
0 share
share
tweet
pin
sms
send
email
With the Cavs in their own bubble, spending the last two days quarantining at the team hotel, sources say fans should expect to see a hulked-up Collin Sexton, a slimmer and more toned Kevin Porter Jr. who has been sporting a braided-look hairstyle, an in-shape Darius Garland and a healthy Dylan Windler. Those four, all added in the draft’s first round over the last two years, will play the biggest part in the success — or failure — of this rebuild.
5 days ago – via Chris Fedor @ Cleveland Plain Dealer

Not everyone will make the Cavaliers Bubble this week. As Edgerrin James once famously said: “I only went to college 2 ½ years, but I know what ‘voluntary’ means.” And for all teams holding workouts during this time, it’s completely voluntary. The Cavaliers in attendance are veteran frontline starters – Kevin Love and Larry Nance Jr. – all three of last year’s first rounders – Darius Garland, Dylan Windler and Kevin Porter Jr. – the squad’s leading scorer, Collin Sexton, and reserves Dante Exum, Alfonzo McKinnie and the newly-added Jordan Bell.
1 week ago – via NBA.com 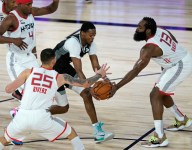 The fastest players in the league, according to NBA 2K21

When Daugherty came back to the Cleveland area this past season and mingled with the team, he had opportunities to speak with Cavs players both young and old. “It’s really funny because Collin Sexton is an excellent young man, and Darius Garland and these guys look at you and they know who you are, but they kind of don’t because they (are too young),” Daugherty said with a laugh. “And I remember having that feeling when I was playing and older guys would come around. You knew who they were, but you didn’t really ever see them play much — because you weren’t even born.”
4 weeks ago – via Kelsey Russo @ The Athletic 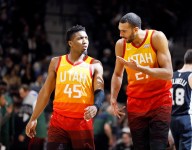 Where do Rudy Gobert, Donovan Mitchell rank among most prolific lob duos?

Since the season ended, the Cavs have considered a number of possibilities. With limited salary cap space — and a desire to avoid the tax — they couldn’t claim Theo Pinson or Allonzo Trier. While they revisited a deal with Trier after he cleared waivers, the former Knicks guard was looking for more money and a different contract structure than the Cavs were willing to give. Members of the front office also questioned his fit alongside young guards Darius Garland, Kevin Porter Jr. and Collin Sexton.
3 months ago – via Chris Fedor @ Cleveland Plain Dealer

The league spent $3.75 billion on player salaries this year, and a replacement-level player would command the veteran’s minimum of $1,618,520. Work backward and overall, a player who was 1 point per 100 possessions above replacement level (say, Landry Shamet or Langston Galloway) was worth $3,183 more than the minimum for every minute he played. Such a player playing 1,000 minutes over the course of the season was worth just less than $5 million. The most valuable player based on this was (duh) Giannis Antetokounmpo, whose production this year was worth $63.75 million in my methodology. I didn’t use negative values for players — the vast majority of the most terrible players are rookies or developmental players who are holding down roster spots for future purposes. For the curious, the two least valuable by this metric were both 20-year-old guards — Cleveland’s Darius Garland and Portland’s Anfernee Simons.
3 months ago – via Mike Vorkunov and John Hollinger @ The Athletic

Skyy Clark will finish out his high school career at basketball-rich Brentwood Academy, and — though he hasn’t been able to play on the Nike circuit this spring because of cancellations related to the coronavirus pandemic — he’s still getting reps in on the court. And Clark has found some talented running mates to help sharpen his game.
4 months ago – via Lexington Herald-Leader