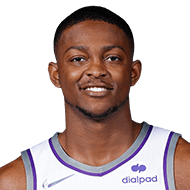 Jason Anderson: From Kings PR: With his second assist of the game at the 5:33 mark of Q2 at MIL, De’Aaron Fox now has 2,129 assists. He surpasses Mitch Richmond (2,128) for 2nd in total assists in the Sacramento era.
8 hours ago – via Twitter JandersonSacBee

Because across the league, how eras are defined, how playoff appearances arrive, how executives’ and coaches’ job statuses remain secure, it all boils down to the symbiotic dance of teams’ supernovas. The Kings’ fate boils down to Fox and Sabonis functioning as opposite charges of a powerful battery. “Fox is unselfish, I’m unselfish. I love to play in the pick-and-roll, he loves to play in the pick-and-roll. We want to show people that we can win, and win consistently, apart from everything that goes on in the NBA,” Sabonis told Yahoo Sports. “I think that’s the most important thing, is to show that we can turn this franchise around.”
1 week ago – via Jake Fischer @ Yahoo! Sports

Sabonis, meanwhile, is producing at a Chris Webber-like level. He has the best net rating (plus-5.1) of any starter and leads the team in assists (6.4). He’s become virtually unguardable at the elbow, ranking first in the league in assists (1.1) and third in points (4.1) from that spot on the floor. His bone-crushing screens spring Sacramento’s shooters (“Unbelievable screens,” said Kings guard Kevin Huerter) and the 26-year-old Sabonis is one of two players averaging at least 15 points, 10 rebounds and five assists. The other: Giannis Antetokounmpo. “Offensively we are exceeding what I thought we could do,” said Kings coach Mike Brown recently. “Some of the numbers we put up, when I see it, I keep shaking my head. To the guys’ credit, we can shoot. I have seen it since the summertime. … All the little things you have to do offensively, we’re trying to do.”
1 week ago – via Chris Mannix @ Sports Illustrated

share
tweet
send
sms
email
Sabonis has planted his flag here, actively sewing the Kings’ new tradition of triumph while making a home in wine country, just a short trip from wife Shashana’s family in Los Angeles. They are building their own household, nursing a newborn who came into their lives in March. He returns to Napa following games, that purple beam glowing in Sabonis’ rearview for almost an hour. “It’s awesome to get home and just …” — here, he exhaled — “… relax your brain. There’s so much basketball in the NBA. It’s such a long season, film, coaches, training staff, here all day. When you get home, you just want to take your mind off things. I’ve realized that time means a lot.” Fox has his own acre-plus of solitude far closer to the facility, where he and his wife, Recee, are expecting their first child, a boy, in February. Sacramento is the only city they have ever known in this roundball universe. They have always felt a cohesion with these sleepier streets. “It’s not L.A., Miami. But we don’t do those things anyway,” Fox said. The couple doesn’t drink, not even a drop of red at the wineries over the summer. He prefers his late nights poring over video games.
1 week ago – via Jake Fischer @ Yahoo! Sports 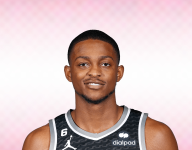 De'Aaron Fox on changing agents: 'Nothing to do with wanting to be traded or wanting to move on'

In an exclusive Bleacher Report interview with the speedy star who is in the midst of an All-Star-caliber season, Fox clarified why he’s changing agents at this juncture of his career. “When you’re an athlete who has any notoriety and you make a major change, it’s going to circulate and people are going to speculate. But for me, I love being in Sacramento,” Fox told B/R. “This move had nothing to do with wanting to be traded or wanting to move on. This has more to do with myself and the business of basketball, and I feel like they’re able to help me in ways that I’ve never been able to be helped before. It was really a level up.
1 week ago – via Chris Haynes @ Bleacher Report

share
tweet
send
sms
email
“I love being here in Sacramento,” Fox told B/R. “The fan interactions, it’s kind of like being at Kentucky. No matter how good the other sports are, it’s always going to be about basketball whenever you’re in that city. If you’re able to win here, I feel like it’s just a different feeling. And obviously being able to stay with the team that drafted you, somewhere you’re comfortable as far as life goes.
1 week ago – via Chris Haynes @ Bleacher Report